The very controversial week in American congress has resulted in huge discussions on social media platforms like Facebook. This situations ultimately forced Mark Zuckerberg, CEO and co-founder of Facebook, to shed light on the situation. Mark  has shared his support for Muslims around the world.

In a short Facebook status on his official page, on Wednesday, Zuckerberg pledged his support for Muslims, informing the Facebook community that the social network is “a peaceful and safe environment”. Mark Zuckerberg Raised Voice to Support Muslim Community on Facebook as he said: 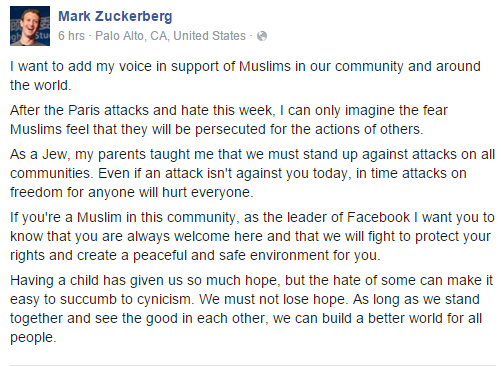 Mark didn’t mention names but actually he wanted to point out towards the recent claim made by presidential candidate Donald Trump, who this week called for a total ban on Muslims entering the U.S. Zuckerberg said:

“As a Jew, my parents taught me that we must stand up against attacks on all communities. Even if an attack isn’t against you today, in time attacks on freedom for anyone will hurt everyone.”