After the launch of Meizu 16 and 16 Plus, the company is all ready to launch its one more smartphone called Meizu 16X. The company has started sending out invites. According to the press invite, the Meizu 16X will launch on September 19.

Meizu 16X will have 6 GB RAM and Snapdragon 710 chipset

Meizu 16X has already appeared on TENAA, revealing most of the specs. The new phone will have Snapdragon 710 chipset. Moreover, it will have 6 GB of RAM and 64 GB of storage. The users can expand the memory by using a microSD. Meizu 16X will have a regular tall screen with 18:9 ratio and Full HD+ resolution. 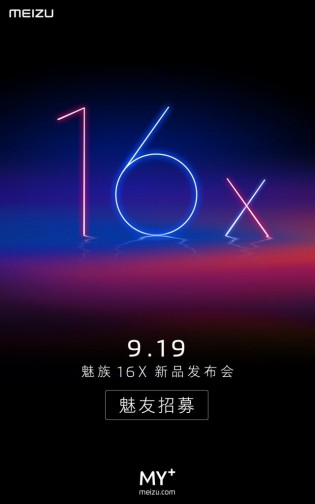 There will be a dual camera on the back with a 20 MP main snapper and a 12 MP secondary sensor. The selfie shooter will also be 20 MP. Meizu 16X will come with Android Oreo and the latest Flyme all over it. Moreover, the phone will launch in Matte Black, Ceramic White and some shade of Gold. However, the company has not revealed any pricing and availability detail yet.

See Also: Meizu 16 and Meizu 16 Plus Specs Revealed Just A Day Before the launch