Meizu Note 9 Is in the pipeline of rumors for many weeks. Almost all the specs of the device have been listed on many certifications. Note 9 has appeared on TENAA previously. Recently, it has also appeared on AnTuTu. However now, the company has announced the launch date of Meizu Note 9. Meizu Note 9 Launch Date is Set to be March 6. The phone will initially be available in China. However, this is not the only smartphone that the company will launch. The company will launch Meizu Note 9 Lite as well. A live image of Note 9 Lite has leaked online. It shows us the front side of the phone with small bezels.

The phone is also running AnTuTu and it made a score of 144,020 points in the benchmark test. The listing also revealed that the upcoming smartphone will come with Snapdragon 660 SoC. Moreover, the smartphone will launch with Android Pie. It also has a display with 2244 x 1080 pixel resolution. 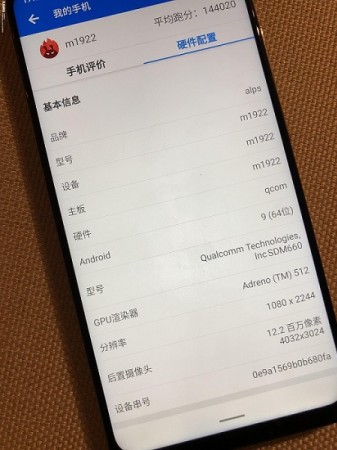 Meizu Note 9 Lite will come with a 12.2 MP rear camera, but it’s unclear whether it will sport a dual-camera setup like the Note 9 or not. This is all what we know about the phone. But don’t worry we will get the phone for real on March 6th.

According to the TENAA Listings, the Meizu Note 9 features a 6.2-inch display with a waterdrop notch and support for full HD+ resolution. Moreover, it is powered by a 4,000mAh battery cell to keep the lights on. The company may include the support for 18W mCharge rapid charging technology on the handset. In addition to that, the phone will not have support for the microSD card slot. There will be a fingerprint scanner apart from the dual camera setup at the rear. The phone will sport Snapdragon 675. The Snapdragon 675 chipset is built with 11nm processing technology that will fuel the Meizu Note 9. It will also include Adreno 612 graphics.

The handset will have a 20-megapixel selfie camera. On the other hand, the back panel of the phone will feature a 48-megapixel + 5-megapixel dual camera setup. The company will use a 48-megapixel Samsung ISOCELL Bright GM1 sensor as the primary lens in the dual camera setup according to the latest reports. According to some of the previous rumors, the phone will be available in black and blue color. The Meizu Note 9 Price is expected to be 999 Yuan (20,773 PKR).