The Islamabad High Court (IHC) finally seems to come to the Regulator and Industry rescue by ordering to delegate authority to Member Compliance on the behalf of PTA. This is a welcoming decision as numbers of important decisions are pending due to PTA’s dysfunctional state as there is neither a Chairman nor a Member Finance in PTA. There are a number of important cases that are still pending, resulting in a stalemate within and between PTA and industry. Member Compliance has been finally given the authority by IHC to take decision on PTA’s behalf, so the industry and even internally the organization should expect quick disposal of such cases, which is a very healthy sign. Although the need of the appointment of new permanent PTA Chairman and Member Finance is still there that is highly important for the smooth functioning of ICT Industry stakeholders and Government alike.

Pakistan’s Telecom and IT industry showed commendable progress over the last couple of years. Pakistan took some huge jumps to secure a position among ICT advanced nations but unfortunately on this road to success, for the past few months the industry was facing many bumps due to absence of a functional Authority or Member. Previous Chairman PTA, Dr. Ismail Shah was truly a man of action who led PTA from the front and managed to achieve number of milestones over a very short period of time. After his retirement in October, 2017 things came to a halt as the Government under a controversial directive to the lone Member not to exercise any Power of the Authority without the Prime Minister approval. The PTA had approached Cabinet Division earlier on this issue sighting law for allowing to act as per the law but were asked to refrain from taking any decision. The tenure of PTA chairman and Member Finance ended back in October 2017, while the government still hasn’t been able to make fresh appointments.

This is not the first time that appointment of Chairman PTA has been delayed. Previously, the appointment of Chairman was also finalized after Supreme Court’s involvement and government was given a firm deadline to finish the appointment process. Although the delays in government process are nothing new but the repercussion that the ICT Industry has to face are quite serious. There are a number of pending decisions that need to be settled but due to the absence of a functional Authority, those matters still remain unresolved.

The Islamabad High Court while giving a ruling regarding a show cause notice to a PTA licensee on fine imposed on delay in the commencement of operations said case was settled and dismissed by the court and emphasized on powers of the Member or Members of the Authority. The Islamabad High Court cleared the way through its decision that Member Compliance PTA has the authority to exercise the PTA powers despite the existence of vacancy meaning thereby, in the absence of PTA Chairman and Member Finance, the lone Member Compliance can take decisions on behalf of the Authority.

The Decision of the IHC said: 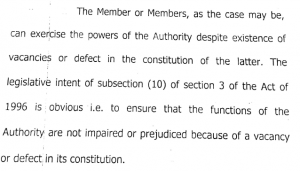 Importantly, the decision by IHC may also provide relieve to contract employees whose tenure was about to expire that if not regularized immediately would have serious negative repercussions on the PTA functioning.

Read Next: Provision of Cellular Service is not as Important as National Security: PTA