Microsoft’s DirectStorage has now been released. It has new Windows feature that promises to reduce the time it takes for PC games to load.

With the DirectStorage software developer’s kit, game developers may start adding the technology into their current products. “Windows games can ship with DirectStorage starting today,” Microsoft claims. “By allowing developers to more completely use the speed of the newest storage devices, this public SDK release brings in a new era of fast load times and realistic environments in PC games.”

Previously, games could only load assets from the hard drive by making one I/O request at a time, and each request had to be finished completely before the next could be executed.

Even though Microsoft states that 11 is “our favoured path for gaming,” it will work with Windows 10, not just Windows 11. 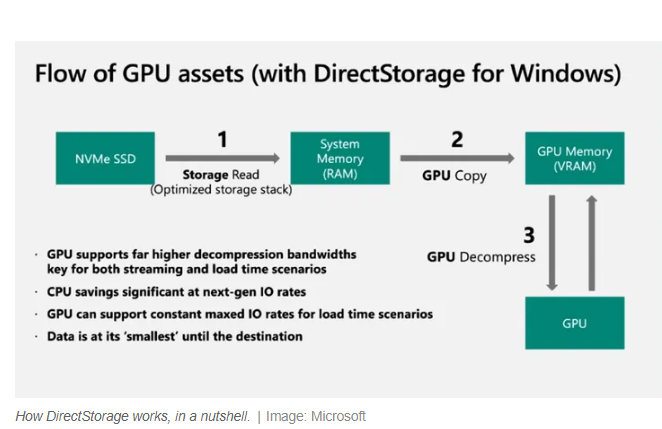 DirectStorage can possibly speed up the loading time on “any form of storage device,” such as an HDD, according to Microsoft. However, the largest gains will be seen when the game is installed on NVME SSDs, which will be available starting with PCIe Gen 3.0.

Right now, Microsoft hasn’t mentioned any games that will utilise the technology, but you can bet that any games that use DirectStorage on Xbox will also use it on Windows. Because it’s not a switch Microsoft can turn, you’ll have to wait for individual developers to incorporate it in each game.