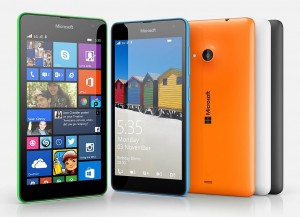 Celebrating the Microsoft takeover with an all-singing, all-dancing flagship, the Lumia 535 is an ultra-budget phone. It has that familiar plastic body, with rounded replaceable covers.  Its 5-inch display has a 960×540-pixel resolution; it has a 1.2GHz quad-core processor. It also includes features no similar phone can match, such as a wide-angle, 5-megapixel front-facing camera aimed at the selfie takers out there. With a dual-SIM version also available in some regions the Lumia 535 appears to tick all the right boxes for a cheap smartphone. One area that’s particularly lacking is its connectivity — the Lumia 535 does not support 4G data speeds, so you’ll only be able to use 3G networks.

Microsoft Lumia 535 Review will guide you to the specifications, cons and pros, images and technical reviews about the device. 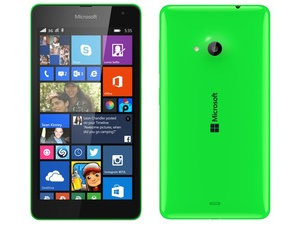 There are some things that come to your mind when you hear the word Lumia. And the most prominent of these are the vibrant colors and candy bar design. The Lumia 535 stays true to the rest of the family and carries the Lumia features ahead. The Lumia 535 has 5-inch display shoved inside. This 5-inch display has to be one of the better things about the phone, especially since the Lumia 530 had a 4-inch screen. Given the price, the display is large and clear. Find the power and volume buttons around the edges, along with the 3.5mm headphone jack and micro-USB port for charging and data transfer. Under the casing there is micro SD card slot and SIM tray.

Lumia 535 has 5-megapixel cameras front and rear, with a 24mm wide-angle lens at the front. It also has an LED flash and autofocus on the main camera. There are actually two camera apps: the standard Windows Phone one and Lumia Camera – previously known as Nokia Camera. The Lumia 535 takes decent photos in good light, but doesn’t capture as much detail. The front-facing camera on the Lumia 535 is better than most at this price. Its 5-megapixel resolution and wide-angle lens make it easier to fit your friends into shots.

As a Lumia phone, it of course comes with Windows Phone 8.1, along with the latest software update, codenamed Denim. Windows Phone 8 is easy on the eye, made up lots of large, bright tiles that show live information. You can resize these tiles and reorder them to suit your preferences, set different backgrounds and group tiles together into folders, thanks to the Denim software update. Another recent feature is the notification panel that you pull down from the top of the screen, like in Android. It shows incoming notifications from your messaging apps or emails, as well as giving quick access to critical settings such as Wi-Fi and screen brightness. 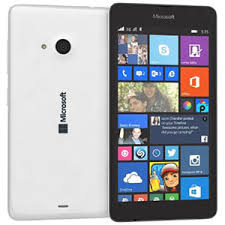 The Denim update also includes Microsoft’s new Siri-like voice assistant, Cortana. Like Siri, you can ask questions such as, “What’s the weather like tomorrow?” or, “How much is £5 in dollars?” and you’ll be given results in the app, or shown a list of Web results, if Cortana doesn’t have the answer. Being able to do a search by pressing and holding the search button and speaking your question is certainly quicker than typing out in a search in the browser.

Inside the Lumia 535 has a 1.2GHz Qualcomm 200 processor, backed up by 1GB of RAM, which copes fine with everyday tasks. The phone uses up close to 5GB out of the 8GB storage. So you will need to buy a SD card along with the phone to use it well.

Two comprehensive tools were used to check the performance of Lumia 535 and its standout position amongst its competitors. 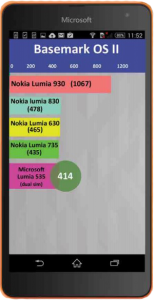 This benchmark features a comprehensive suite of tests and produces an objective overall score as well as a breakdown of each tested area, including system internal and external memory, graphics, web browsing, camera, battery and CPU consumption. Our device landed on number 5 in this test with 414 points. 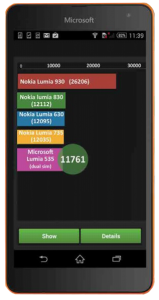