After a long time, finally Microsoft is going to set out a flagship smartphone Microsoft Lumia 950 XL with outstanding features and specs, that will surely amaze you with its deadly fast hardware. Microsoft has tried to give full fledged smartphone to its windows users, that will give ultimate experience of windows 10 in Microsoft Lumia 950 XL. The Microsoft Lumia 950 XL has been packed with 2.0 GHz Qualcomm snapdragon processor, powered by latest windows 10. The awesome interface and can be connected to any screen and have experience of windows 10 just like a computer, runs 3GB RAM, 32GB ROM expandable up to 200 GB, 5.7 ” Quad HD AMOLED display, coring Gorilla Glass 4 gives extra protection to screen, bundled with elegant 20 MP rear camera with triple LED flash and 5MP front camera with wide angle feature. Thanks to powerful battery of 3340 mAh that gives long backup to Microsoft LUMIA 950 XL and can be charged through Qi Wireless charging. It definitely supports 4G with LTE Cat.4 (up to 150Mbps), Cat. 6 LTE (up to 300Mbps), USB Type C port with high speed data transfer rate. Microsoft Lumia 950 XL price in Pakistan is Rs. 75,000 as its a high end smartphone andn designed with advanced hardware.

Well, the Microsoft LUMIA 950 XL comes with standard earphone handsfree, USB type C cable, and Quick charger. Earphone has good sound experience while it doesn’t have sound variations, it would be better to have woofer earphone. Thanks to USB type C for fast data tranfer rate upto 10Gbps. The Quick charger promises to charger your smartphone quickly.

Microsoft Lumia 950 XL is designed with traditional look of Lumia series. It is packed with  thick strong plastic cover and fat bezel around the huge scattered 5.7″ touch screens on the front to protect it. It is perfectly shaped with 151.9 x 78.4 x 8.1 mm  dimensions, however a bit thick as compare to other competitors with same specs. The AMOLED display is being protected by Corning Gorilla Glass 4 sheet, 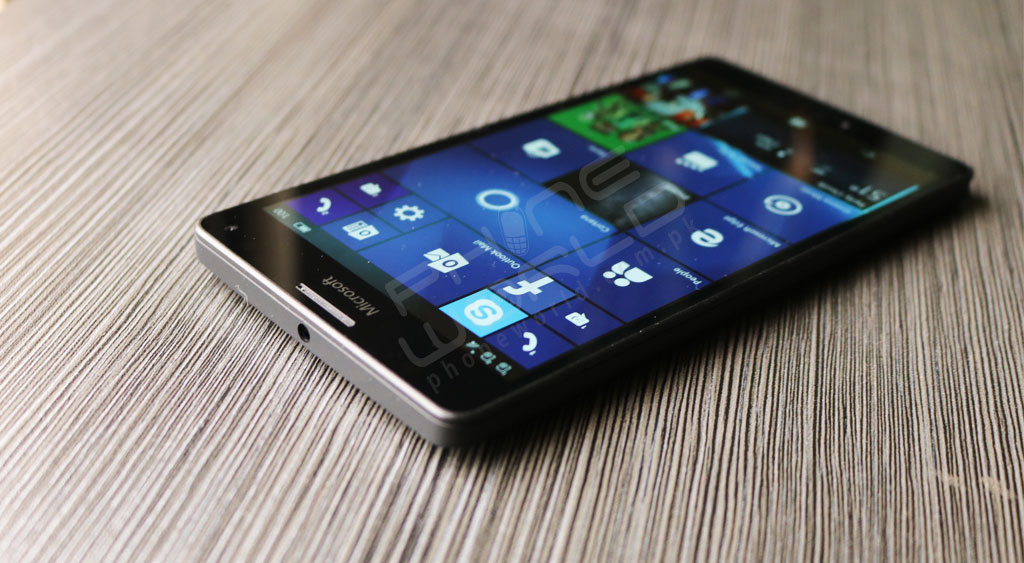 Microsoft Lumia 950 XL has been packed with 5.7 inch AMOLED display with 16M colors. Microsoft preferred 1440 x 2560 pixels screen resolution same as SAMSUNG GALAXY S6. While enriched with  minimum 518 ppi pixel. The display screen has captured almost 80% of area of front view. The AMOLED has perfect viewing screen from every angle upto 30° degree. Thanks to Corning Gorilla Glass 4 to protect the underneath display AMOLED screen. The touch screen give you quick reply as you touch it with finger tips. Three virtual buttons are placed inside the touch screen and has a quick feed back. As usual the touch screen is divided into three sections, The top area is reserved for notifications, then comes a huge area for icons and all other fun takes place there and at bottom obviously there is buttons section. 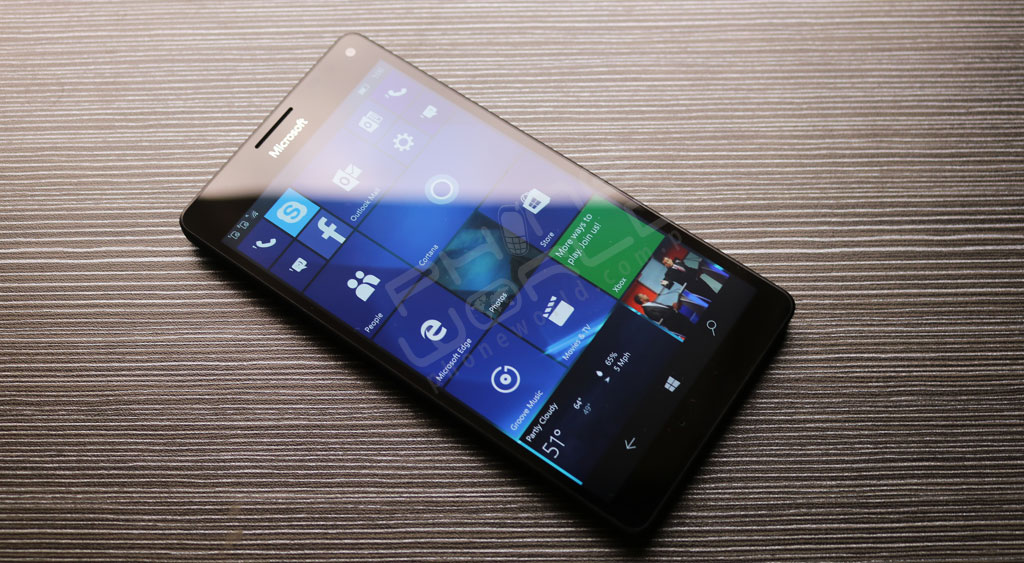 Microsoft Lumia 950 XL is equipped with 3GB RAM and 32GB of ROM to save your data for long time until you need. On extra storage space Microsoft Lumia 950 XL shows generosity, that can be further expanded upto 200GB with microSD slot. In addition, it provides OneDrive cloud storage to store data remotely.

Microsoft Lumia 950 XL is packed with 20 MP rear camera with carl ziees optics, and 5MP front camera with wide-angle for group selfies.The rear camera has auto focus type with two stage capture key. The camera has digital zoom with quality result, the Microsoft Lumia 950 XL has employed 6 lens optics for quality images with reduced noise, triple LED are set to assist the camera in low light places. The camera give you access to set the ISO, White Balance to take perfect shoot. further you can make 4K HD videos with 30 fps. 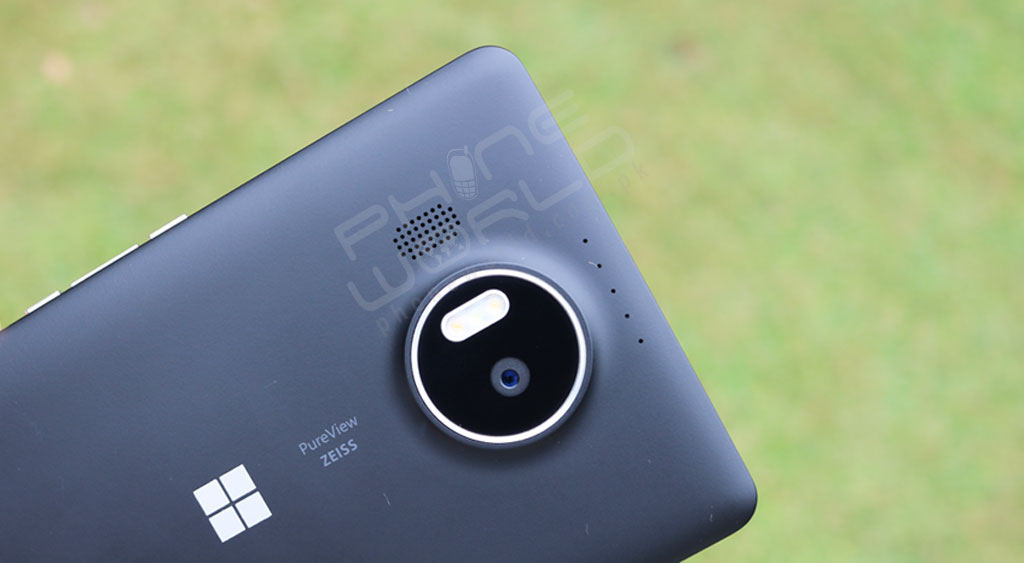 The Microsoft Lumia 950 XL comes with an elegant, smart and high resolution 20 MP rear camera. The camera uses carl ziees optics with 6-lens optics  for quality result that you never seen before. The rear camera has its own triple LED flash to support in low light areas, Auto focus feature with two stage capture key. Camera is equipped with some outstanding features; like Backside-illuminated image sensor, PureView, True 16:9 sensor, Fast Focus, High resolution zoom. The resolution of image is (5344 x 3008) px which is a real high resolution image left no noise in image.The size of an image depends on the color intensity in image.

The Microsoft Lumia 950 XL is set out with full HD 5MP front camera with wide- angle feature for group selfies. It has its own flash that will help you to take selfie in low light places, the camera is able to capture the image of 2590 x 1450 px resolution that give clear shot with wide large area covered. The front camera makes video of 1080p of 1920 x 1080 resolution.

Here is detail of internet connectivity, the speed may be vary according to network operator:

Microsoft Lumia 950 XL is powered by powerful, long lasting 3340 mAh battery that can be charged through 2.0A quick Charger and can also be charged by Built-in wireless charging. The battery has good standby time of at least upto 5 days, while you can use it for almost 15 hours on 3G calls, 2.0 charger promise to charger your mobile in half hour from flat to 50%.

Microsoft Lumia 950 XL looks decent, and prominent in hand, its dimensions are 151.9 x 78.4 x 8.1 mm that let you hold in hands easily; however it is too thick to make perfect grip in hands. It has 167 grams of weight that is fine for a flagship smartphone with advanced hardware. The display has 5.7″ QWHD screen along with front camera. While the Microsoft still go with matte black plastic cover. Rear camera on back side of smartphone looks outstanding with triple LED flash. Shiny silver color button are placed right edge of Microsoft Lumia 950 XL which has good feedback.

While talking about the sides of Microsoft 950 XL which is sleek, slim and round edges adds more beauty to smartphone. The top side has audio jack for handsfree while the bottom has MicroUSB 3.1 Port which is used for both charging and data transfer too. The right side of Microsoft 950 XL has physical buttons; the power button is placed between volume buttons and there is an extra button which is used camera to capture instant image.

Microsoft Lumia 950 XL run Windows 10 which is latest operating system of Microsoft. The home interface has installed apps icons and it can be resized by pinning on icon. By swipe down on notification area; you will find Quick settings option just like Android interface. The Home screen has two flavours, one is live tiles in which the screen has all the icons like tiles and second screen has list of apps.

The Microsoft Lumia 950 XL has windows Hello app for biometric authentication framework in Windows. This giant supports iris recognition that is managed by dedicated camera sensor on the top of display.

What is New in Microsoft Lumia 950 XL:

The Microsoft has employed liquid cooling technology to handle the heat up issue. The continuum feature that enables you to connect the smartphone to desktop monitor screen via dock which will switch the phone’s user interface to desktop screen and look like windows 10 desktop screen.

The smartphone has been tested with a benchmarking to ensure the its performance and reliability. It has shown magnificent result and secured outstanding points. In below snapshots you will find the score to each hardware separately. It is a complete package with beautiful design and quality hardware.

Microsoft Lumia 950 XL is a high end 4G/LTE supported smartphone equipped with highly advanced hardware and latest Windows 10. The smartphone furnished with amazing technology and  specs. The Microsoft Lumia 950 XL is bundled with 2.1 Octa Core processor, 5.7″ QWHD AMOLED display, 3GB of RAM and 32GB of built in memory which is further expandable up to 200GB. The mighty battery of 3340 mAh can be charged fast through Quick charger. The Microsoft employed liquid cooling technology to overcome the heating issue and it has also the “Microsoft Hello” feature for biometric authentication framework for iris recognition.