Microsoft always amazes us with the launch of their new apps and features. Recently, we have come to know that Microsoft has launched its collaborative Whiteboard app on Windows 10. Microsoft’s Collaborative Whiteboard App has been in preview for Windows 10 for last few months but now they have made it widely available on PC’s. Its versions for iOS and web will be launched soon.

Microsoft’s Collaborative Whiteboard App allows users to make notes on a virtual whiteboard. All the notes and documents made on this Virtual Whiteboard can be shared and edited with others in real time across devices. There are only two basic steps to collaborate with multiple people within any organization. Those steps are described as follows:

Microsofts’s collaborative Whiteboard App users can doodle anything in real time. The businesspersons and even though the students can use this App for various purposes. You can make flowcharts, tables, hierarchical procedures, presentations or anything related to your work. 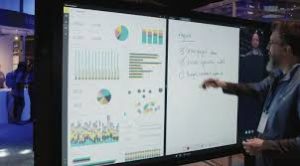 Microsoft hasn’t restricted its Whiteboard app to any particular browser. All major browsers are supported. Microsoft also unveiled that there will be no technical limitation on the number of people collaborating through Whiteboard. In order to make this App compatible with all modern devices, keyboard input and touchscreens are also supported so that people don’t have to rely on the styluses only.

Collaborative working is surely a key to success in the modern era so this platform can help you to share your broad ideas with thousands of people by sitting at your home.