MoITT Organizes a Workshop on e-Government

Ministry of Information Technology arranged first of its kind “e-Government Workshop-2014” in Pakistan with the slogan “e-Government for smart Governance”.

The purpose of the workshop was to obtain realistic input from participants on e-Government initiative and play a significant role in advancing the e-Governance initiatives that have been started to strengthen governance processes in Pakistan. Korean Ambassador in Pak –VP NIPA Government Organizations, focal persons from different Ministries/department Officials of ITU and other dignitaries participated in the Forum. Inputs from this forum will contribute toward the proposed “E-Government Master Plan” entrusted to be adopted as major working document of the newly constituted National Information Technology Board (NITB).

Vice President (NIPA), Mr. Deuk Jung Kim
[pull_quote_center]e-Governance brings a significant change in the working culture, behavior, and environment and said that NIPA (Korea) will not only support in preparation of the master plan but will continue their support during the implementation of e-Governance programs. He highlighted the importance of match making between Korean IT expertises with talented young human resource capital of Pakistan. The Ambassador congratulated Pakistan of succeeding in ITU election and the Ministry of IT in particular for securing top performing Ministry position[/pull_quote_center].

Minister of State for Information technology, Ms. Anusha Rehman said
[pull_quote_center]To make the governance more effective and achieve the goals of government efficiency, effectiveness, transparency, accountability in decision making, and to deliver efficient and cost-effective public services to citizens, e-Governance is being adopted as a tool. In this regard, Government of Pakistan is aggressively perusing the roll-out of e-office suite at the federal government to achieve the aforesaid goals. Recently, the International community has shown its confidence in our policies being pursued since last 15 months.[/pull_quote_center] 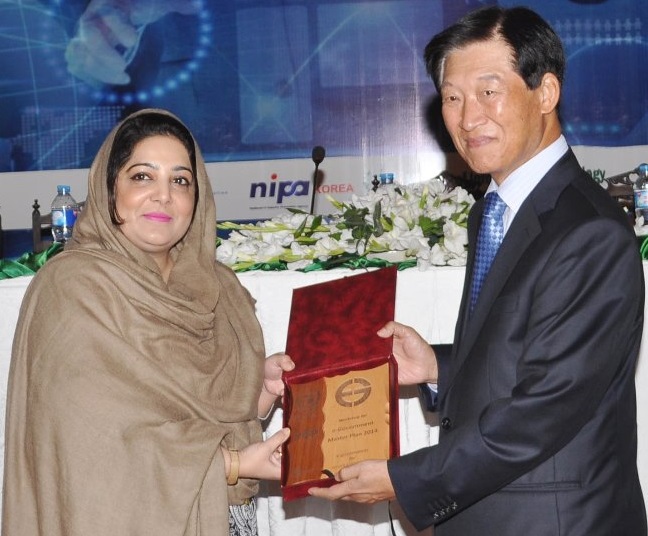 Anusha Rahman said that in spirit of democratic governance, present government manifesto and visionary approach, Government of Pakistan is giving very high priority to information and communications technologies (ICT) sector, particularly e-Governance system in the country. E-Government Master Plan will be a workable, proactive roadmap for the NITB with due benchmark to measure progress on the plan.