Today, I am going to provide some information which most of you will surely be not aware of. I’m talking about the mobile phones. You must be thinking that I’m in some kind of jolly mode and making fun. As everybody would be thinking that its obviously the iphone 11 or some other new smartphone. But, unfortunately they are wrong. There are some phones who are almost a decade old but surprisingly they are the world’s most expensive phones. The most modern iphones and Galaxy smartphones cost more than 1,500 USD and that’s a lot of money for most people. But these price tags are nothing compared to what i am going to tell you. These are very unique and rare mobile phones and you can’t find them on every mobile store. They are mostly used by the elites.

You will be really amazed and shocked after reading the list i am going to share. These are very unique and rare mobile phones and you can’t find them on every mobile store.

11 Most Expensive Mobile Phones ever created

Here’s the list of Top 11 mobile phones ever created. 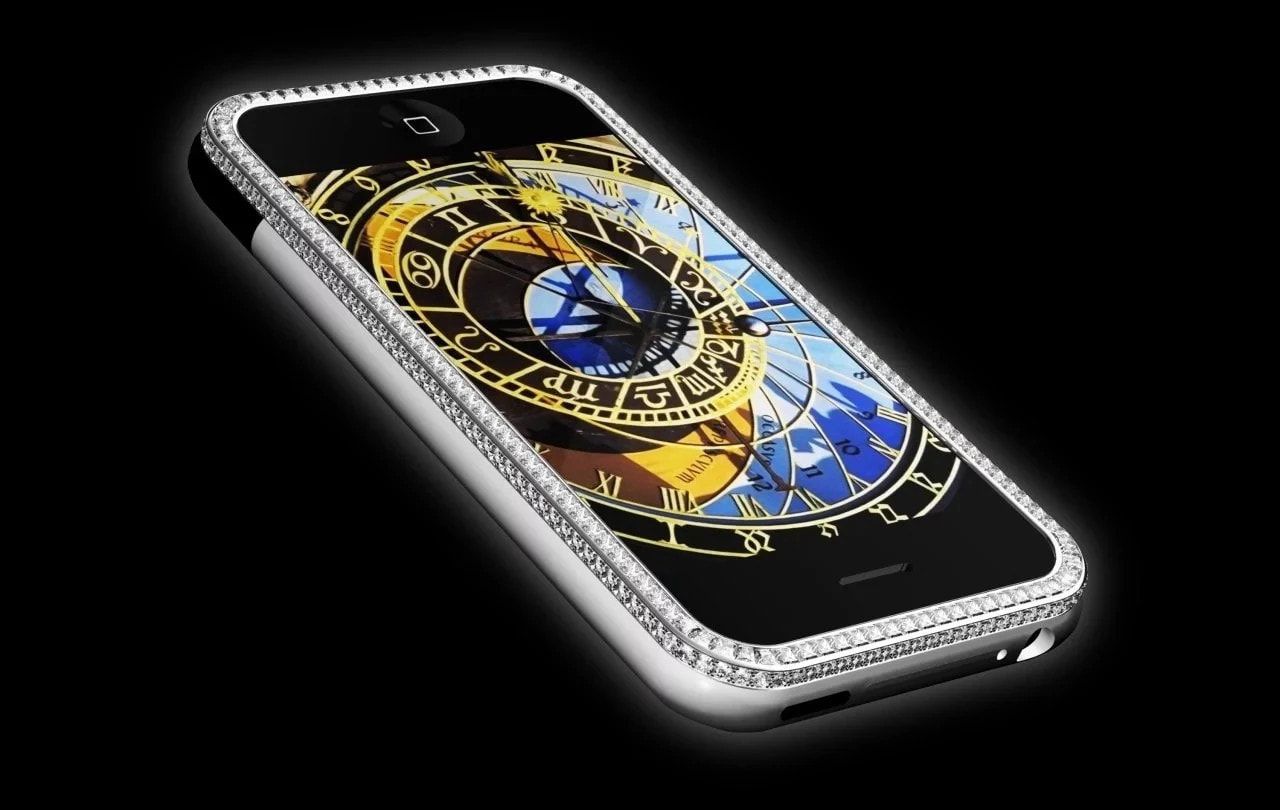 The iPhone Princess Plus comes in at number 11 on our list. It was designed  by famous Austrian designer Peter Aloisson. It was made by gold with original iPhone base. Along with that, there were 318 diamonds. The price of this phone is $176,400. 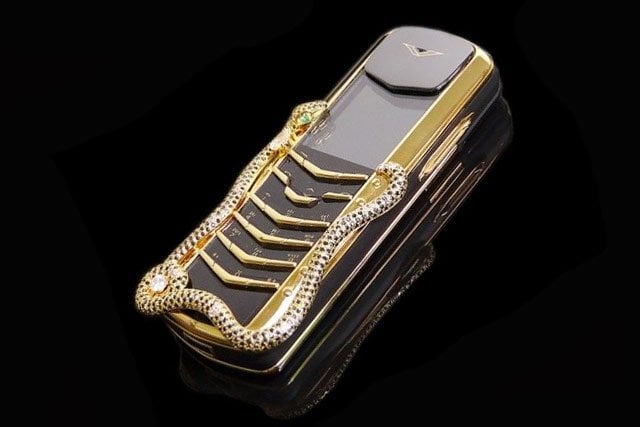 Virtue is famous for manufacturing some of the most expensive and luxury phones in the world. The Signature Cobra is another such example. There are just 8 signature cobra mobile phones in the world. Each of them has a price tag of $310,000. This expensive mobile phone was designed by French jewellery company,  Afterwards, it was assembled by hand in the UK. The mobile phone is not just gold plated, but the most astonishing feature of the phone is a King Cobra which wraps itself around the handset; is made of solid gold and contains four-hundred and thirty-nine rubies and two emeralds. As only eight have ever been known to be created, getting your hands on one could be a bit of a nightmare, even if you’re well connected. 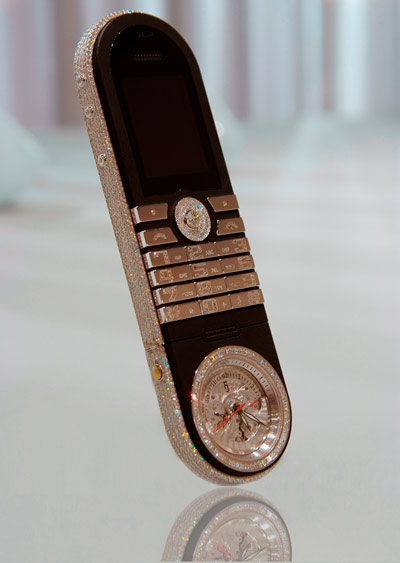 The Goldvish Revolution phone is a $488,150 phone by the Swedish brand Goldvish, that joins the league of the most expensive phones to be created. This phone set is a part of a thirty-two-unit series and gives a unique difference in its outlook when the shape is noticed, adding to its rarity. The making occupies white and pink gold, diamond and fine leather with coating of a sapphire glass display case. This Revolution handset also has a detachable analog watch by Fredric Jouvenot making it more desirable to be bought by someone able to spend the number of thousands of dollars for a phone. 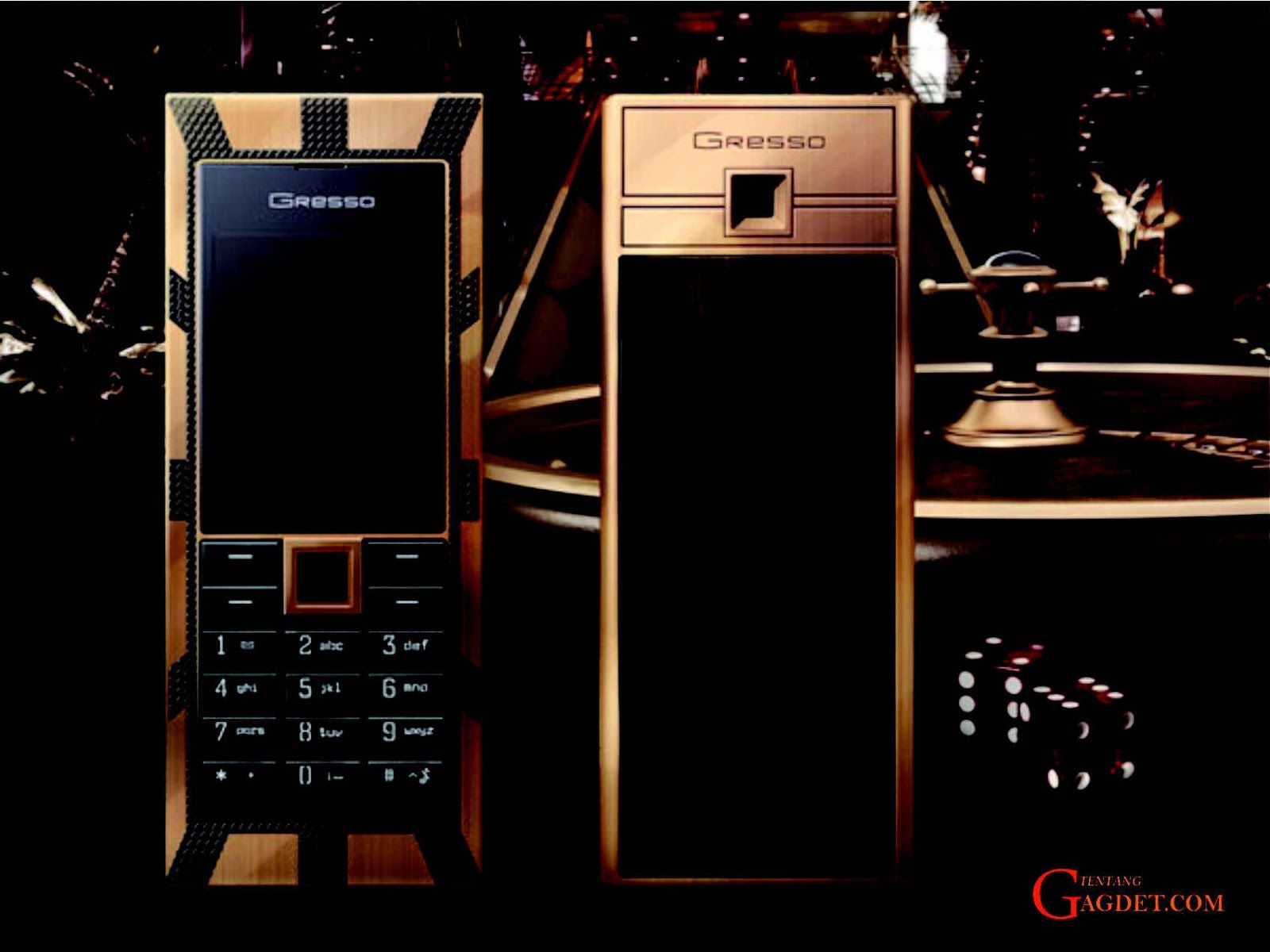 Costing $1 million, the Luxor Las Vegas Jackpot phone is a limited-edition series phone launched the world famous accessory designer Gresso. This phone being in the bandwagon of the expensive most phones of the world comes in a series of only three units with an exclusive number imprinted on the back. Made from 180 grams of gold and black diamonds at 45.5 carats, each key is also beautified with manual polishing of 32 carat gem sapphires. In case of customer demand of having a different phone texture, wood from a two-hundred-year-old African tree is used for the back panel, justifying the price and making the phone attractive and impressive. 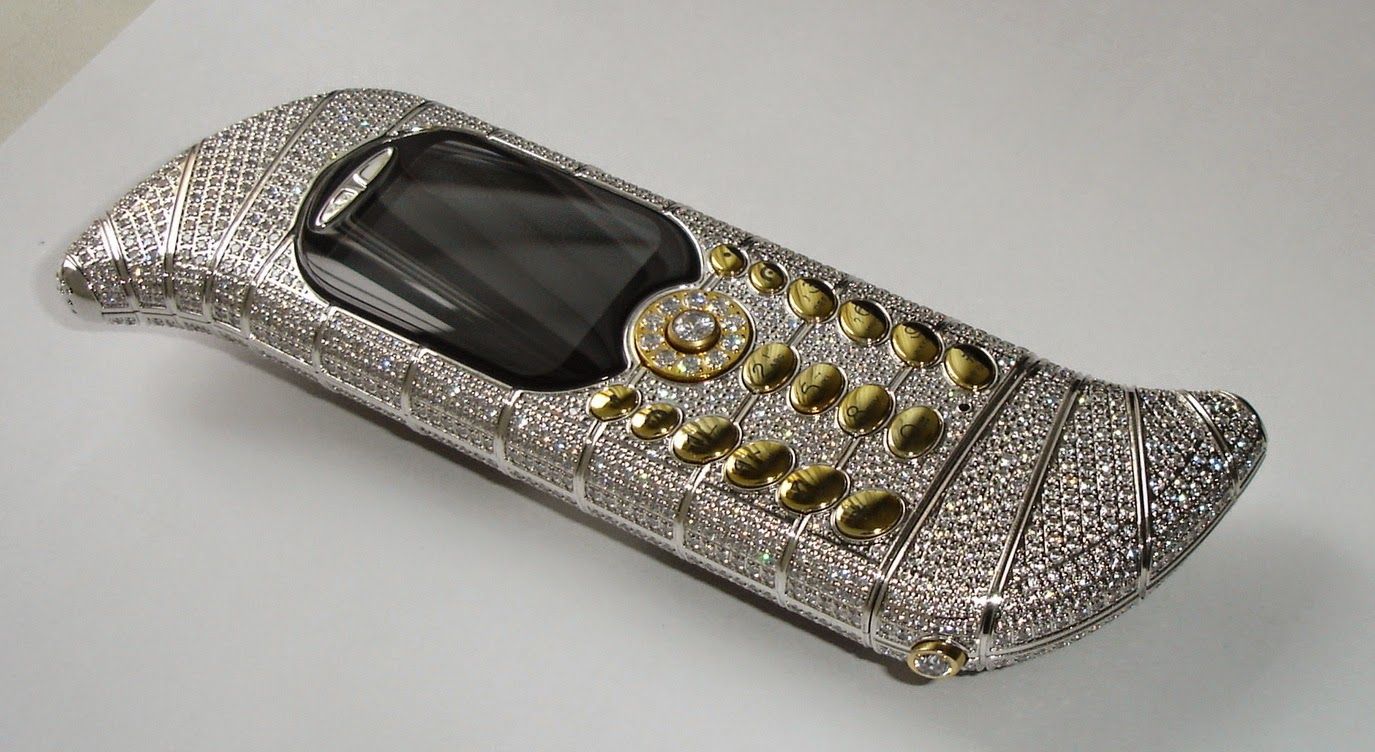 Goldvish again joins the list with a million-dollar phone and this time the mark is set by the Le Million. Goldvish being a renowned luxury brand gives the consumer a remarkable experience. The designing of this handset had been done by a jewelry and watch designer Emmanuel Gueit, and the phone broke records of being the most exclusive and expensive phone in the world and making a place in the Guinness Book of Records at the time of its release. It is made from 18 karats of white gold and 120 carats of VVS-1 grade diamonds that are studded into it, having the display case made of Sapphire Glass. Goldvish made sure about its exclusivity and only manufactured three phones to create a new class of its limited-edition series. 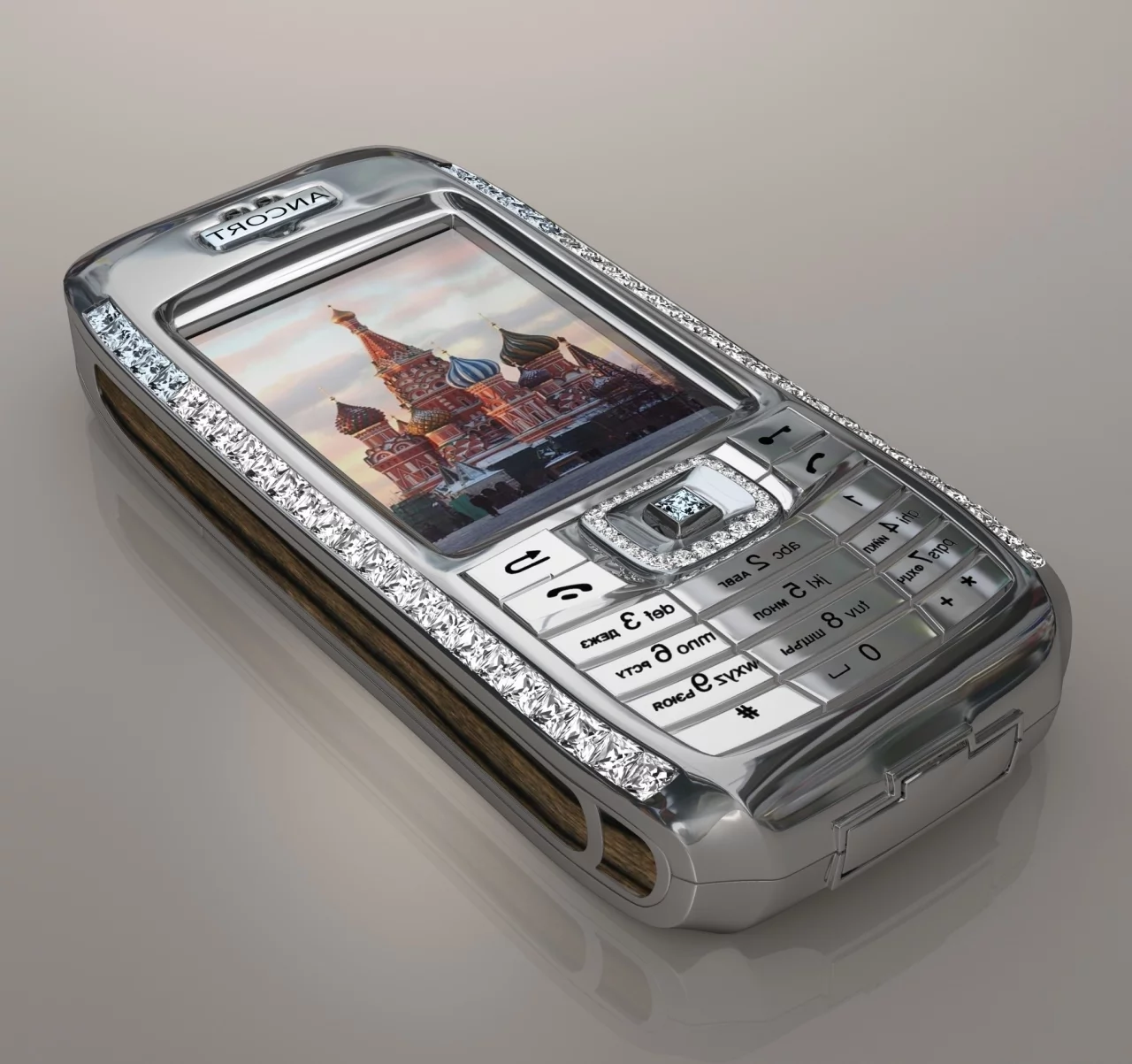 Crossing $1 million, the Diamond Crypto smartphone used to be the world’s expensive most smartphone. This handset was designed by Aloisson and manufactured by JSC Ancort. Most parts of the phone are made from solid platinum whereas the logo and home button are made from rose gold. Along with those there are 50 diamonds studded into it that include the rare variety of blue diamonds, and there is a small fraction of wood present on the sides of the phone that is made from Macassar Ebony. The software is also very impressive of this phone as it has been developed to include a special encryption technology that keeps the owner’s personal information safe.

The iPhone 3G Kings Button is the fifth expensive mobile phone in the world. Its actually a unique iPhone. It has a huge price tag. The cost of this mobile phone is $2.5 million. Kings button is the name given to this iPhone because the sole home button in iPhone 3 has been alternated with 6.6-carat single-cut diamond. Yes, that’s true. And there is more. The white gold strip, which runs around the entire edge of the phone, is decorated with one hundred and thirty-eight diamonds.  Along with the diamonds, the whole iPhone 3 Kings Button is composed of yellow, white and rose gold. This beautiful iPhone was designed by an Austrian, Peter Alisson. But if I have to choose the best attribute of this iPhone, it will surely be the diamond home button. That makes this iPhone an exceptional masterpiece. Because what can be more royal than a diamond. 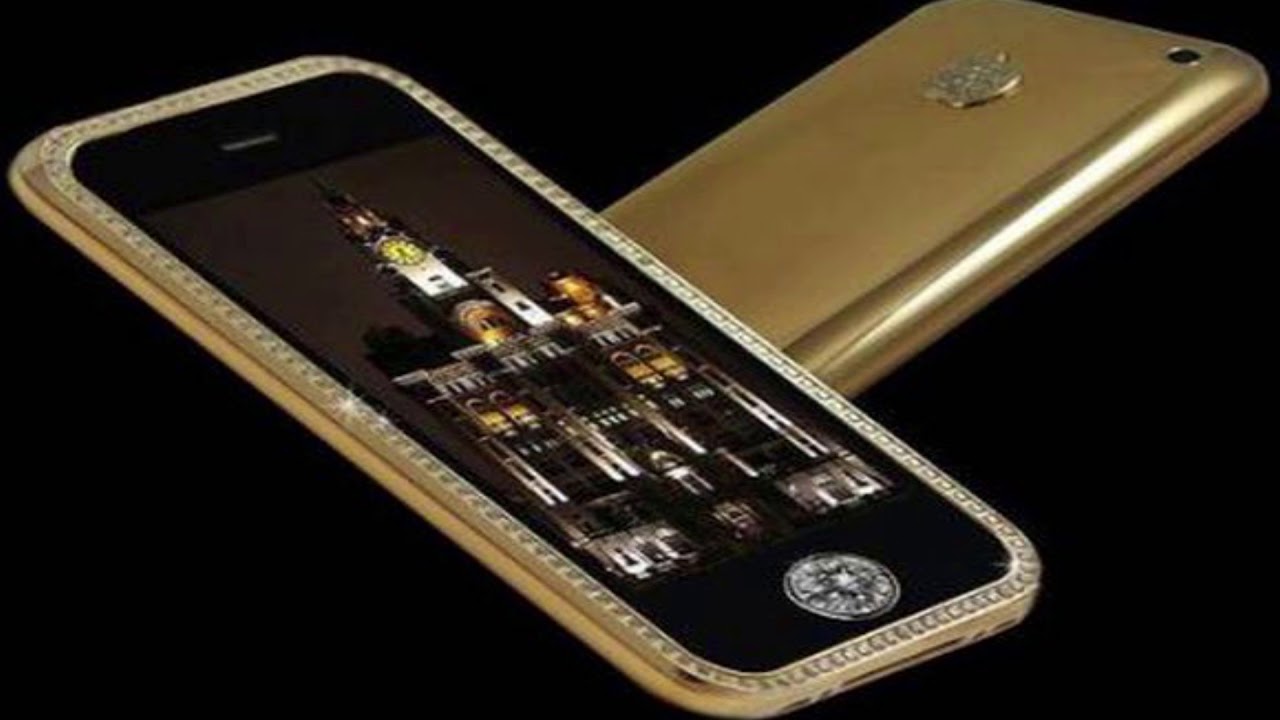 The iPhone will mostly dominate this list. Goldstriker is one another example . It is a bit similar to Kings Button but carrying more carats. This iPhone is a masterpiece of Stuart Hughes. It is composed of two hundred and seventy-one grams of twenty-two-karat gold. The bezel of this iPhone is made up of one hundred and thirty six diamonds. The apple logo is consisting of fifty three diamonds. Like the Kings Button, the Gold Striker also has a single-cut diamond for a home button, but this one is a whopping 7.1 carats. Moreover, the phone is also packed in an unusual manner but its quite brilliant as well. It is presented in a solid granite box, made from one single piece of granite, covered with top quality leather and Kashmir Gold. It is overall an extravagant phone. The price of this iPhone is an astonishing. It’s available in $3.2 million. 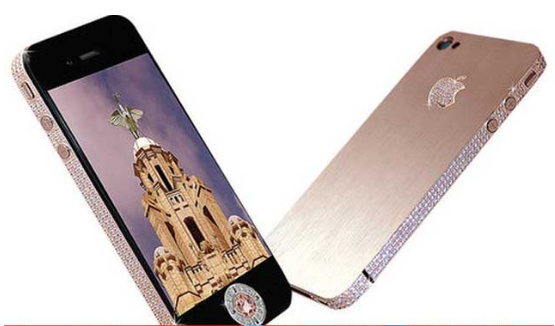 The third most expensive mobile phone in the market is also an iphone. And yet another masterpiece of Stuart Hughes. The iPhone 4 Diamond Rose Edition is an exquisite and special iPhone. And it is very rare. There are only two pieces of this iPhone in the world. Both iPhones were actually customised for their owners. The iPhone is composed of solid rose gold. Along with that, it consists of five hundred carat diamonds. The apple is also designed with the help of fifty three diamonds. Like the former two iPhones in our list, this one also has a diamond home button. There is a single-cut-pink 7.4 carat diamond. Similar to the Gold striker, it will be packed in a solid granite box. This phone has a price tag of $8 million. 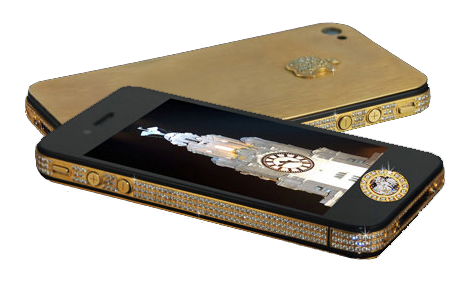 The star designer of this list Stuart Hughes further proliferates his dominance by launching yet another unique expensive iPhone. It is the second most expensive phone in the world. Being the second most expensive phone in the world comes with a lot of expectations. With that said, the Elite Gold iPhone 4 certainly doesn’t disappoint. It is a purely handmade phone. The iPhone is layere with five-hundred, one-hundred-carat diamonds and its rear panel and logo are made from twenty-four-carat gold. in addition to that, the logo is also composed of fifty three diamonds. Like its predecessors, the home button is made from diamond. But its a huge 8.6-carat single-cut diamond. And there is a good news for buyers, an extra 7.6-carat single-cut diamond comes with this phone too.

The packing of this iPhone is extravagant and royal. The box in which this phone comes is made up of solid platinum with original polished skeleton piece of a dinosaur. Along with that, It’s finished off with several rare precious gemstones like Opals, Star Sunstone, Rutile Quartz, Charoite and Pietersite. This iPhone is available in $9.4 million. 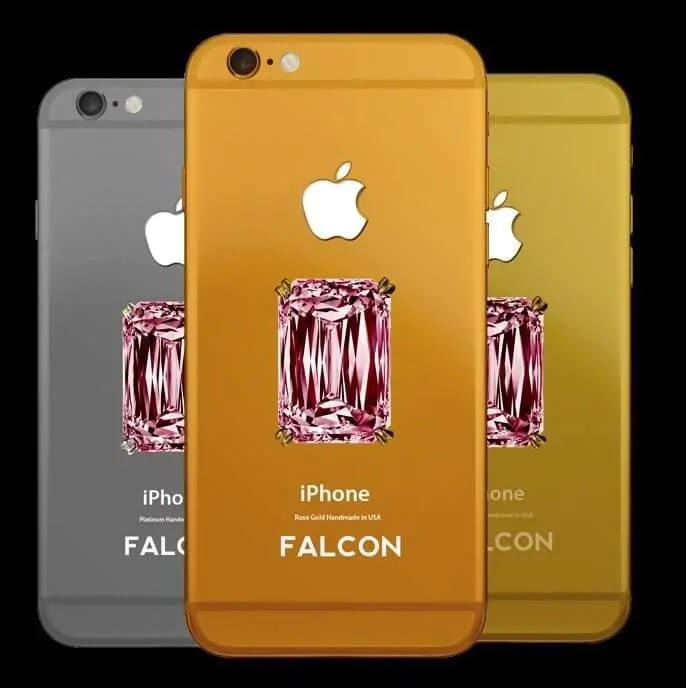 The Falcon Supernova iPhone 6 Pink Diamond Edition is the most expensive device ever created. It is the most valuable mobile phone of the world. The Supernova is a fully customised iPhone 6. The phone is surrounded by twenty four carat gold and platinum. It has a hack prevention technology to keep the owner’s information safe from unwanted prying eyes.But the most exceptional thing in the Supernova is a large pink diamond on its back. The Pink Diamond Falcon Supernova is currently owned by the Asia’s richest man’s wife, Nita Ambani. The cost of the World’s most expensive mobile phone is $48.5 million.