The people who have got Motorola phones this year know very well that it already contains a Motorola-branded face unlock feature in the settings. This is a facial recognition system that allows you to unlock your Moto handset with a glance. Recently the company has introduced a companion app, Moto Face Unlock in the Play Store for those smartphones. Moto Face Unlock App for Motorola users can update your pre-loaded face unlock with new features.

The current version of the app is exactly the same as that of the native Face Unlock application on compatible Moto devices. But in the future, when the feature will be updated, Motorola can simply update the app instead of pushing out a software update that will need to get vetted by carriers.

The Moto Face Unlock app will update your pre-loaded face unlock with new features. This App is not compatible with all Motorola phones right now. The list of compatible devices is given below:

You’ll find face unlock in your settings under “Security & Location.” It’s just a camera-based unlock system, so there’s nothing fancy going on. You just frame your face in the preview, and the phone learns what you look like. 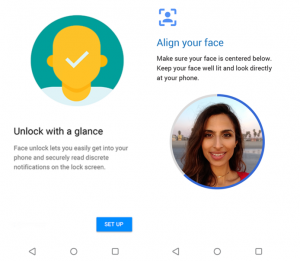 Moreover, Motorola calls out Performance improvements and minor bug fixes in the play store update. So, the unlock face app will not be dramatically different. It could make more substantial changes in the future via an app update, though. So, just wait and watch what comes next. If you are moto users then download the App via Play store and try to explore it by yourselves.