It will be quite early to discuss the new Motorola G generation in depth. However, rumors have already started pouring in. Recently, a bunch of Moto G7 New renders showed up that confirmed many of its design traits.

A fresh new leak from OnLeaks appeared to confirm many of the design traits. According to the renders, the Moto G7 will likely feature a curved glass back design. It will either have a new, distinctive “teardrop” or “waterdrop” style notch. Moreover, it’s screen size is expected to be 6-inches. Furthermore, Moto G7 is expected to deliver an improved screen to body ratio as well. It will have a fairly wide bottom chin. 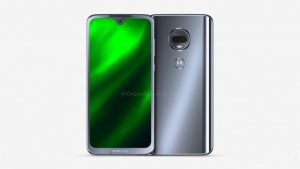 Furthermore, we can clearly see two cut-outs next to the selfie camera and a microphone hole on the bottom chin. In addition to that, this new set of pictures clearly shows a Type-C port on the bottom and a 3.5mm audio jack. The Moto G7 may come in a record four variants, probably to simplify the overall Moto lineup. As per rumors, four variants can be the vanilla G7, pictured here, joined by a G7 Play, G7 Plus, and G7 Power.

Moreover, the regular Moto G7 will feature 4GB or 6GB RAM, with 64GB of storage and an undisclosed the octa-core Snapdragon chipset. Furthermore, the whole device is expected to be powered by a 3,500 mAh battery. The smartphone will run Android 9.0 Pie out of the box. We are still not sure about all these specs because it will be too early to confirm any specs right now as there are no words by the company yet. The phone will launch most probably in Q1 or the beginning of Q2 2019. So, just wait and watch what comes next ahead of its launch.