The Moto G7 comes with a 6.24-inch full-HD+ (1080×2270 pixels) Max Vision display. It is powered by Qualcomm Snapdragon 632 SoC clocked at 1.8GHz. In addition to that, the phone packs 4GB of RAM and 64GB of inbuilt storage. It has a microSD card slot to expand memory up to 128GB. Additionally, there is a 3,000mAh battery to keep the lights on. The Moto G7 features a dual-camera setup on the back with the 12-megapixel primary sensor and an f/1.8 lens. On the other hand, there is a 5-megapixel secondary sensor with an f/2.2 lens. An 8-megapixel sensor with an f/2.2 lens is also present on the front as well.

The Moto G7 Power features a 6.2-inch screen and it just packs an HD+ (720×1520 pixels) resolution. The Moto G7 Power’s noticeable feature is the 5,000mAh battery onboard. In addition to that, the company claims that it will be able to last for 55 hours. Isn’t it just amazing??  Furthermore, the phone features 32GB of inbuilt storage with 3GB of RAM. It is powered by an octa-core Qualcomm Snapdragon 632 SoC. It has a 12-megapixel single camera with an f/2.0 lens on the rear as well as an 8-megapixel selfie shooter with an f/2.2 lens.

The Moto G7 Plus features a 6.24-inch full-HD+ (1080×2270 pixels) Max Vision screen. It is powered by Qualcomm’s Snapdragon 636 SoC.  Moreover, it comes with 4GB of RAM and 64GB of inbuilt storage. The dual camera setup on the rear comes with a 16-megapixel primary sensor with an f/1.7 lens and 5-megapixel secondary sensor with an f/2.2 lens. It also supports optical image stabilization. Furthermore, there is a 12-megapixel selfie snapper with an f/2.0 lens. A 3,000mAh battery keeps the lights on. 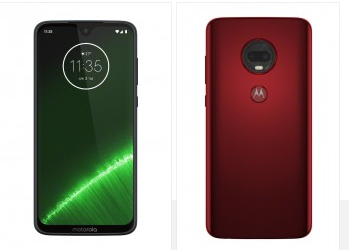 The Moto G7 Play is the cheapest model out of the four. The handset sports a 5.7-inch Max Vision screen with HD+ (720×1512 pixels) resolution. The smartphone is powered by Qualcomm’s Snapdragon 632 SoC coupled with 2GB RAM. Additionally, a 3,000mAh battery keeps the lights on. The Moto G7 Play comes with a single 13-megapixel shooter on the rear with an f/2.0 lens and an 8-megapixel selfie camera on the front with an f/2.2 lens.