Motorola is all set to launch a new handset dubbed as Motorola One Action. The handset got leaked a few days back. Then, we got our hands on its specs sheet. Recently, a new render of the smartphone surfaced online revealing design details of the handset. Motorola One Action seems quite similar to Moto One Vision that was launched last month.

The One Action will be an Android One smartphone. Moreover, it will come with some specs similar to the One Vision. It will also be powered by the Exynos 9609 chipset. The phone will feature a 6.3-inch FHD+ display. It will come with a 3,500 mAh battery to keep the lights on.

The One Action will also come with the fingerprint scanner on its back like the One Vision. However, it will come with an extra camera, despite being an affordable version of the One Vision. It seems a mid-ranger all packed with good specs. The main sensor in the camera set up of the smartphone will be of a 12.6MP unit. In addition to that,  the setup has text written on its right side which says “117° Action Cam 2.0µm”. It means one of the cameras of the upcoming mid-ranger will come with a wide-angle lens. 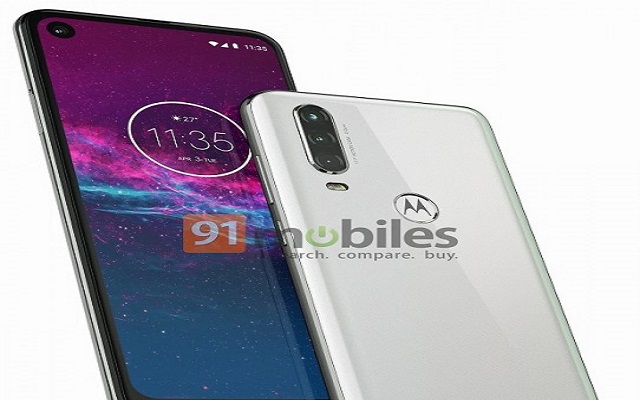 The smartphone will have a punch hole display on the front. Then there will be a power button and volume rocker on the right. In addition to that, there will be a SIM card slot on the left, and a speaker and a microphone at the bottom flanking the USB-C port. The headphone jack on the One Action will likely be placed at the top, similar to the One Vision.