Netflix announced on Tuesday that Exploding Kittens — The Game, a new mobile game based on the famous card game, will be freely available to Netflix users on May 31st. The new release will be distinct from the one now available on the App Store and Google Play, and it will feature two exclusive cards at launch. Netflix wants to include cards based games on the upcoming animated series, which will premiere in 2023 on the service.

Exploding Kittens And Other Games

The company began offering mobile games in early November on Android, followed by iOS a week later, and has progressively added titles to the service since then. Netflix has also acquired a number of studios, including Oxenfree’s Night School.

Moonlighter, Townsmen — A Kingdom Rebuilt, and Dragon Up are three additional mobile games that will be released on Tuesday as part of Netflix’s growing collection of mobile games. 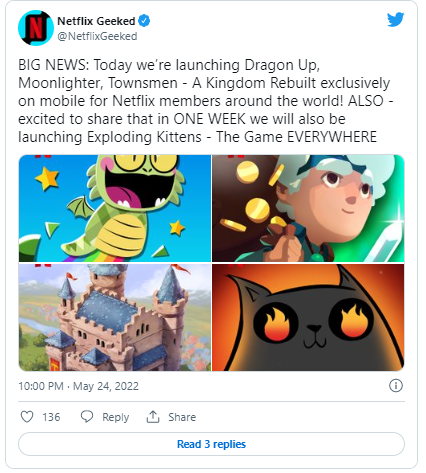 Moonlighter is a game developed by 11 Bit Studios in Spain. By day, players manage a business in a picturesque village in this RPG adventure game. Players explore dungeons, battle creatures, and solve secrets at night.

A Kingdom of Townspeople Rebuilt is the first game from German developer HandyGames to be released on Netflix. Players develop a medieval city, make wise financial decisions, and do whatever it costs to keep their people happy in this game.

East Side Games, a Canadian studio, created Dragon Up. Players hatch and capture rare dragons in order to save their country in this single-player adventure game. Netflix says the game’s graphic style was inspired by Scandinavian design and illustration found in early children’s stories and fairy tales to make it feel more magical. The game is now available in over 30 languages.

Netflix is going through a hard period, having just fired off several employees and reported losing customers for the first time in over a decade.