Google has launched a new version of the Google Drive desktop app. Then new version has come along a massive makeover, bringing  Google Backup and Google Sync together with Google Photos and other features. Apart from this, Google Drive for desktop brings more improvements.

While the news was released yesterday, nothing was mentioned about the features yesterday, thanks to ArsTechnica, we have some idea of the new addition and improvements.

Among plenty of improvements, it has replaced the home and business version with some more important workspace features with the goal of making them easily accessible by users. 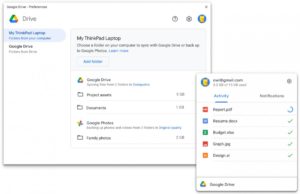 Below mentioned are some highlights regarding the new changes Google made to its drive app for desktop (Courtesy:  ArsTechnica).

The size of the new Google Drive app is 238 MB, which makes it extremely heavy to be downloaded. Though the app will take more time to download, it is worth it. For those who really want to be a part of this new drive, the app should keep on looking for notifications within the app.

Google has also warned people to shift to the new app by the end of September 2021 as from October 1, Google Sync and Backup apps will stop working and lose all support from the company.