Apple has recently announced new iPhones, iPhone 11, 11 Pro and 11 Pro Max. Now all three phones appeared on AnTuTu revealing the raw performance of all three iPhone 11s along with the memory configurations. Let’s first take a look at the pictures revealed by AnTuTu. 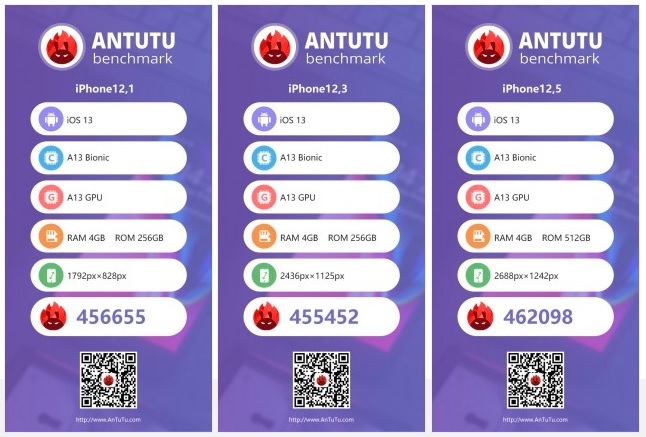 All New iPhones have 4GB of RAM and A13 Bionic chipset

As it is clear from the screenshots that all three iPhones use A13 Bionic chipset. So, there is no significant difference between these phones in terms of performance. Moreover, all three new iPhones have 4GB of RAM and iOS 13. iPhone 11 and 11 Pro will also have 256GB storage. Whereas iPhone 11 Pro Max will have 512GB storage.

Although, all these phones perform pretty same. Whereas there is a difference as well. As compared to the previous generation of iPhones, the new phones scored 28% higher overall in AnTuTu.

Let’s see whether these phones help the company to gain more profit or not. Till then do tell us what do you expect more from the company.