We all know that a few days back, the company’s president, Lin Bin posted a render of the unannounced Mi Mix 3 and said that we will try to bring the smartphone to the market by the end of October. He also confirmed that its launch date will be announced soon. Recently, a new leak showed up. It suggests that the upcoming smartphone, Xiaomi Mi Mix 3 launch date is decided to be October 15.

A few weeks back, Xiaomi executives confirmed that the Mi Mix 3 will reach consumers at the end of October. However, that doesn’t seem true. The latest alleged teaser that has just leaked out shows that the smartphone’s announcement event will actually take place on October 15. Let’s have a look at that. 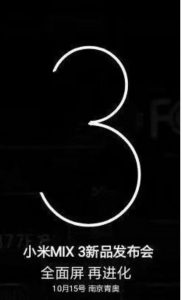 According to the all previous leaks, Mi Mix 3 will be the high-end flagship phone with a bezel-less screen. The biggest change in the Mi Mix 3 will be its design. The device will have very thin bezels on the sides and at the bottom. It will have a sliding rear panel that will house both the front and rear cameras.  Mi Mix 3 is expected to launch with a Qualcomm Snapdragon 845 processor. Xiaomi Mi Mix 3 will also sport The Ai Dedicated Button.
For selfies, the handset will have a 20-megapixel pop-up front camera. Reportedly, an in-display fingerprint scanner will be also present on the Mi Mix 3. The smartphone will carry support for Qi wireless charging according to some previous leaks. The smartphone will have a battery of around 3,500mAh. Moreover, it will feature Android 9 Pie straight out of the box along with the MIUI 10 skin on top.

It is expected that the initial availability of the smartphone will be limited to the Chinese market only. However, the smartphone may make its way to the other markets at the end of November.
Also Read: Xiaomi Mi Mix 3 Will Feature Xiao Ai- Xiaomi’s Own Digital Assistant
Laiba MohsinLast Updated: Oct 3, 2018
Share
Facebook Twitter Pinterest