With a slim design, the Lumia 830 is an affordable flagship device that delivers high-end innovations such as optical image stabilization and PureView imaging to more people. Offering wide-angle, front-facing cameras; the Lumia 730 Dual SIM and Lumia 735 are built for Skype calls and selfies. Existing Lumia smartphones continue to get even better with the Lumia Denim update, which combines great new features from the latest Windows Phone 8.1 Update 1 with exclusive enhancements such as Lumia Camera, which brings high-quality images at the fastest speeds.

Our strategy is to help people do more with stunning products that unite and showcase the best of Microsoft’s digital work and life experiences. The Lumia 830, Lumia 735 and Lumia 730 Dual SIM combine popular Microsoft services such as Skype, Microsoft Office and OneDrive with amazing Lumia innovations in design and imaging to bring experiences that people value, at prices they can afford. 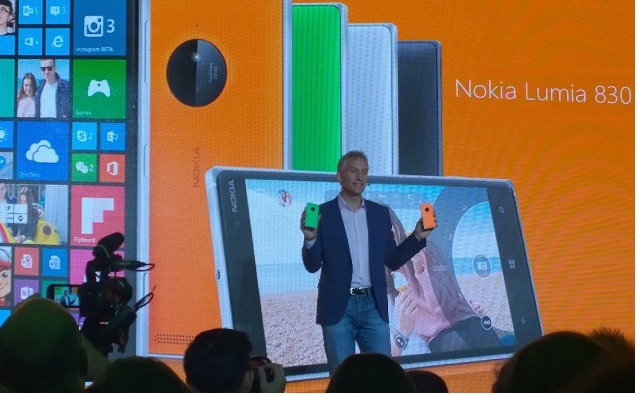 Lumia 830 offers the best of Lumia and the latest from Microsoft in a pocket-friendly design and price. The Lumia 830 captures high-quality images and videos, day or night, with a 10-megapixel PureView camera with ZEISS optics, Rich Recording and the thinnest optical image stabilization system to date on a Lumia. It comes pre-loaded with Microsoft Office Mobile; Lumia Denim; and OneDrive with 15 GB of free storage, allowing content to be synced and shared easily. It comes with flagship Lumia innovations such as integrated wireless charging in a sleek aluminum and polycarbonate design.

With wide-angle, front-facing cameras and a slim, pocketable style, the Lumia 730 Dual SIM and Lumia 735 let people easily capture and share more. The front-facing, wide-angle, 5-megapixel camera is great for Skype video calls, letting people share more of the world around them or bring more family and friends into a call. It features a 2220 mAh battery, 8 GB of internal storage and 15 GB of free OneDrive storage.

Microsoft Devices Group also announced new Lumia accessories like the second-generation smart Wireless Charging Plate DT-903 that makes the most convenient way to charge even better. The Microsoft Screen-Sharing for Lumia Phones HD-10 lets people beam any content from their smartphone to an HDMI-enabled screen. Lumia Denim combines the latest Windows Phone 8.1 update with exclusive experiences for Lumia smartphones. Lumia Denim also cements Microsoft’s leadership in imaging with the introduction of unique innovations in Lumia Camera that make the camera work faster and more intuitively. Lumia denim will initially roll out as an update for Lumia 930, Lumia Icon and Lumia 1520 and as an over-the-air update for other Lumia Windows Phone 8 smartphones, following partner testing and approvals.