Following the launch of Oppo F9, F9 Pro, R17, and R17 Pro, the Chinese manufacturer seems to launch a new handset in the market. Recently, three new Oppo smartphone variants have been spotted on TENAA. The images spotted at TENAA shows the new Oppo Phone with In-Display Fingerprint scanner.

On TENAA, the new Oppo smartphone has been listed in three model numbers – PBCM30, PBCM10, and PBCT10. It is being speculated that all the three variants spotted at TENAA belong to a single handset. However, they will come in different configurations. According to the listing, their specifications are almost identical except the RAM and inbuilt storage.

Furthermore, the images spotted on TENAA does not show a fingerprint sensor on the smartphone. It means that the new Oppo phone will come with an in-display fingerprint sensor. However, it may rely entirely on facial recognition technology. 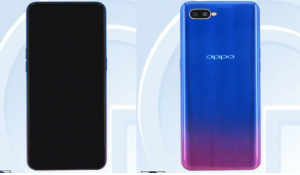 According to the listing, the new Oppo Phone will come in Blue, Red, and Silver color variants. All the variants will sport a 6.4-inch display. They are all expected to be powered by either the Snapdragon 670 processor or the Helio P60 SoC. Moreover, the variants will feature a dual rear camera setup. All of the models are expected to have 3,500mAh batteries.

However, we are not sure about these all Oppo Phone specs as the company has not officially announced them yet.