Xiaomi keeps on introducing new devices and smartphones. Recently, a new poster by Xiaomi surfaced on Weibo. It revealed that the company is all set to expand its family by introducing a new handset or device. According to the poster, a New Xiaomi Phone is expected to launch on November 6.

A New Xiaomi Phone Is On Its Way To The Market

The company posted an image on Weibo which is the Chinese social media site revealing that they are going to launch a new device very soon. The poster revealed that Xiaomi will launch something on Tuesday,  November 6th at 11 AM Pakistan Time. Furthermore, the tagline of the device is a “wonderful upgrade”. It shows that the company may introduce the new version of a smartphone or a smart product released earlier by Xiaomi. Let’s have a look at that:

In addition to this, another leaked image of a Xiaomi smartphone surfaced on Weibo. According to that, the company might launch the Xiaomi Note 6 on November 6. However, the information is based on the leaked image so we are not sure about it right now. Let’s have a look at the leaked image spotted at Weibo: 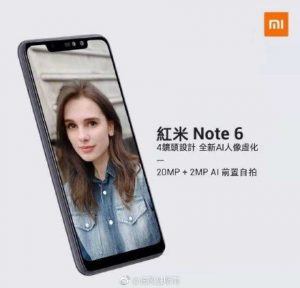 According to rumors, Xiaomi Note 6 will be launched in the coming days. The phone will feature a 6.26-inch IPS LCD display. it will have a 19:9 aspect ratio and Full HD+ resolution. Furthermore, the phone will be powered by the  Snapdragon 626 SoC. The massive battery of 4000 mAh will keep the lights on. Moreover, the phone will have a dual camera set up on the back featuring 12+5MP Cameras. On the other hand, the selfie snappers will be a set up of 20+2 MP.
The phone is expected to launch on Nov 6. However, we are not sure that whether Xiaomi will launch this smartphone or any other upgraded device. So, all we have to do is just wait and watch what comes next.