The government authorities are showing much eagerness to take Pakistan forward in terms of digitization. On Wednesday, National Information and Technology Board (NITB) announced that soon Pakistan would have its own international payment gateway.

This development started after the community of freelancers wrote a letter to the PM Imran Khan in which they mentioned the challenges and opportunities they are not able to avail because of the lack of the federal government’s support. The message also recalled that despite unreliable money transfer systems, inadequate infrastructure, and complex remittance mechanisms, Pakistan’s freelancers got the 4th positions globally in terms of income generation, according to the Payoneer global report 2018.

In the letter to the PM, the freelancers stated,

We are writing this letter as an initiative to express our extreme disappointment and frustration with your lack of concern for Pakistan’s freelancing youth who are feeling deceived by your promises to bring companies like PayPal, eBay, Amazon, along with other global giants. While you go out to convince overseas Pakistanis to invest in Pakistan, local freelancers are being handcuffed by the inefficient institutions right under your nose.

After which NITB shared a news via a tweet,

Taking Digital Transformation to the Next Level. NITB has been tasked with bringing Pakistan’s very own “International Payment Gateway”, in the first, in the country’s history. The project will be available soon for the general public. 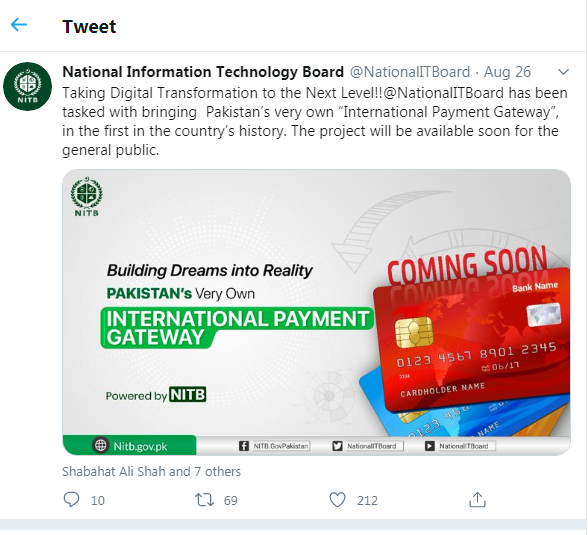 As mentioned above, NITB has made a claim that The International Payment Gateway would be one of its primary initiatives in the country. According to a source, the CEO of NITB gave a presentation about the board’s performance in a recent meeting.

Check out? NITB Collaboration With Private Sector Through MoUs