Nokia X6 is one of the mid-range Android smartphones with the Notched display. It was launched in China back in 2018. When HMD Global released the Nokia X6 in China Android fans were very disappointed by the fact that the phone won’t make it outside of China. However, after some days, Juho Sarvikas announced that they have got a positive response from Nokia lovers so they are deciding to launch this smartphone with a new name as Nokia 6.1 Plus globally.

Launch Date of Nokia 6.1 Plus

HMD Global is now making preparations for the global release of the Nokia X6. The upcoming smartphone will be called Nokia 6.1 Plus instead of the Nokia X6. The expected date of its launch has already been revealed in previous reports. Nokia 6.1 plus will hit the market on July 19. Geekbench listing has also confirmed the launch once again. 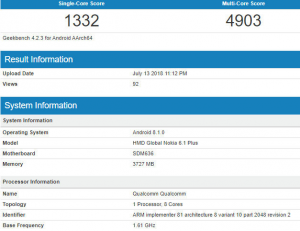 Geekbench score sheet lists 4GB of RAM for the Nokia 6.1 plus. There is no information given about the 6GB Model. We can simply expect the 6GB model to also step outside of China. This is no longer a rumor as Geekbench has confirmed its launch date. Hopefully, Nokia 6.1 Plus will be launched outside China on July 19.