The Finnish Company is all set to launch Nokia 6.2 on its upcoming event on June 6. Nokia 6.2 is rumored to be the international variant of Nokia X71. The company has sent invites for the June 6 Event. However, there had been no further words regarding the upcoming handsets to be launched at the event yet.

If the handset turned out to be the global variant of the Nokia X71, then it will feature a 6.39-inch full-HD+ PureDisplay with 19.5:9 aspect ratio. The handset will be powered by the Snapdragon 660 processor. In addition to that, it will be coupled with 6GB of RAM and 128GB of expandable storage.

The global variant of Nokia X71 will boast a ZEISS-certified 48MP primary camera sensor at the rear with f/1.8 aperture, an 8MP 120-degree super-wide angle lens and a 5MP depth sensor at the rear as well. Moreover, there will be a 16MP selfie shooter with an aperture of f/2.0. It will run Android 9 Pie straight out of the box. The upcoming smartphone will come with a 3,500mAh battery to keep the lights on.

In addition to that, a tweet from Nokia anew hints that the Nokia 6.2 will launch with a price tag around $290. It will be roughly around Rs 43,000 in Pakistan. Let’s have a look at the tweet. 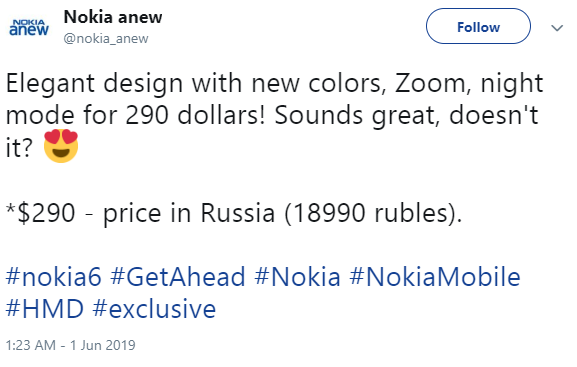 Let’s see what Nokia offers in its upcoming handset. Till then, stay tuned for updates.