Nokia 7.3 reported renderers were displayed online smartphone from every side from all angles and indicate a rear camera specification as well as a hole-punch display. The Nokia 7.3 had already been reported to start in 2020 but later a new report said that in the fourth quarter of 2020 the phone would start. While its debut is not confirmed, rumors also indicate it’s 5G supported.

Tipster Steve Hemmerstoffer also referred to as OnLeaks, who worked with IPEEWorld shared Nokia 7.3 information. In leaks, it shows a flat display with a hole-punch cutout in the top left corner. On the chin, Nokia branding is seen. On the right side power button and the volume rocker are fitted.

A USB Type-C charging port, a microphone, and a speaker is on the bottom of the smartphone. On the top, there is a 3.5 mm audio jack. In the back of a circular camera module a quad camera design layout. On the left side of the module, the dual-LED flash fitted. Underneath the camera module, a circular fingerprint scanner is equipped. 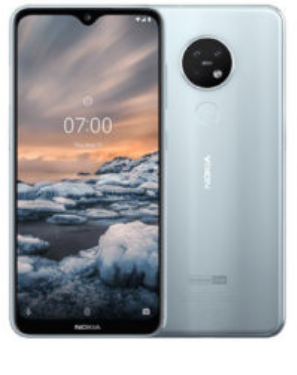 The Nokia 7.3 might be a 5 G phone with a 6.5-inch full-HD+ screen with a hole-punch cut. The report says that the Snapdragon 690 SoC is powered to the smartphone. A 48-megapixel primary sensor and 24- megapixel selfie snapper are expected at the side of the camera at the smartphone. It is expected to come with 4/6 GB of Ram and 64/128 GB Built-in storage. It can pack a 4,000mAh battery with 18W quick charging support. The phone’s back should be glass rather than plastic.