Nokia 8 is one of the most powerful smartphones launched by Nokia to the date. It was launched back in August 2017. We all know that HMD Global is now working on its successor. HMD Global has recently revealed many new devices like the Nokia 7.1, Nokia 3.1 Plus and Nokia 2V and now the company is all set to launch Nokia 8.1 in the coming week. Recently, the mid-range Nokia 8.1 was spotted on Geekbench revealing some of its specs.

The Nokia 8.1 Geekbench listings unveiled some of the specs of the upcoming smartphone. We all know that Nokia 8 was powered by the powerful Qualcomm Snapdragon 835 processor. However, this is not the case now. The Nokia 8.1 will be powered by a mid-range Qualcomm Snapdragon 710. Furthermore, it will be paired with 4GB RAM. Moreover, the company will also offer a 6GB/128GB version. In addition to that, the handset will come with Google’s latest Android 9 Pie straight out of the box. It will have a massive 3500mAh battery. 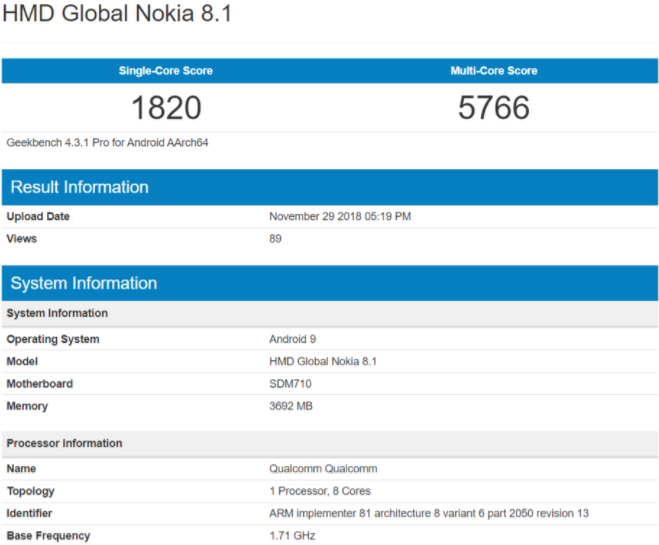 A few days back, Nokia 8.1 Promotional Posters got leaked. According to them, the design of the phone looks like a Chinese Nokia X7. The phone has the same display notch and a vertical dual rear camera setup as we found in Nokia X7. Moreover, the phone has a circular rear-mounted fingerprint sensor and Nokia branding on the bottom chin similar to Nokia X7. Nokia 8.1 Promotional Posters have also revealed that the phone will have a 20-megapixel selfie camera and will run on Android 9.0 Pie with a Qualcomm Snapdragon 710 SoC.

This upcoming new phone will carry a 6.18-inch full-HD+ display panel. The phone’s dual rear camera setup will come with OIS and Zeiss optics. The posters also revealed that this upcoming phone has the same dual-tone anodized metal frame as we have seen in the Nokia X7. Furthermore, the smartphone is expected to be unveiled at the HMD event next month. The phone will see the light on December 5.