Nokia 8 is one of the most powerful smartphones launched by the company to the date. It was launched back in August 2017. Recently, we came to know that HMD Global is working on its successor. HMD Global has recently revealed many new devices like the Nokia 7.1, Nokia 3.1 Plus and Nokia 2V and now the company is preparing for a new phone with mid-range specs. Recently, Nokia 8.1 was spotted on Geekbench revealing some of its specs.

The Finnish company has more surprises for the Nokia lovers. While everyone was talking about the highly anticipated Nokia 9, a new smartphone, Nokia 8.1 popped up on Geekbench. The Geekbench listings unveiled some of the specs of the upcoming smartphone.
We all know that Nokia 8 was powered by a top-tier Qualcomm Snapdragon 835 processor. However, this is not the case now. The upcoming mid-range phone, Nokia 8.1 will be powered by a mid-range Qualcomm Snapdragon 710. Furthermore, it will be paired with 4GB RAM. Moreover, the handset will come with Google’s latest Android 9 Pie straight out of the box. As the phone will have mid-range specs so it is expected that this will be a budget-friendly phone. 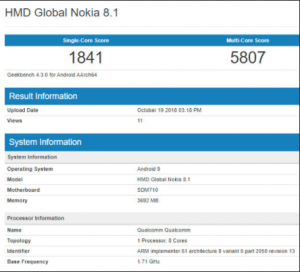 We have further no information regarding this handset. Hopefully, it will start appearing on other benchmark listings in the coming days. We will surely share it with you whenever we will get to know more about the upcoming handset. It seems quite obvious that the company will not introduce this phone this year as it may effect Nokia 7.1 sales.