Nokia 8 Sirocco Users had a lot of complaints that their phone doesn’t contain the latest and the greatest software features. Recently, Nokia’s CPO, Juho Sarvikas announced a good news for the Nokia 8 Sirocco Users. In his recent Tweet, he promised to bring cool new features for the company’s current flagship phone. He said that new features will come as part of the Android 9.0 Pie update. Furthermore, Nokia 8 Sirocco OTA Update Will Bring Camera Improvements & ARCore Support.

This all started with a tweet of an unhappy Nokia user who posted a complaint. He tweeted that Nokia isn’t doing what’s necessary to bring the latest to its flagship, Nokia 8 Sirocco smartphone in terms of software features.

As a response to this complaint, Sarvikas was the first to reply. He was quite fast to reply that the developers’ team is working on a set of new features including ARCore support and better camera experience. He said that those changes will come with an OTA along with Android 9.0 Pie. Let’s have a look at his Tweet. 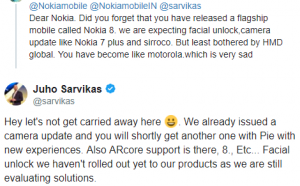 The camera update will most likely change the photography experience. The company promised to bring a change to the users who own Nokia 8 Sirocco. So, they can hope for a better camera experience. In addition to that, the OTA update will also bring ARcore Support. Moreover, Sarvikas also added that HMD has already pushed an essential camera update to the smartphone. He said that we are looking forward to add the face unlock feature. They are evaluating solutions to add this feature in the near future as well.

However, there are no words about the rollout day of the new update. We can hope that the Nokia 8 Sirocco Users don’t have to wait for more in order to avail the new features through this update.