The Nokia 9 is HMD Global’s long-anticipated flagship phone that is expected to release this year. However, we still don’t know its original launch date but hopefully, it will make its way to the markets this fall. The upcoming flagship had been leaked on various occasions. Recently, a leaked image showed up. Nokia 9 Leaked Image shows a crazy never-before-seen camera set up at the back.

The image of what is tipped to be the back of the Nokia 9 was first leaked on Baidu. It had been deleted inexplicably. Recently, the image showed up on SlashLeaks. The leaked image clearly shows the hexagon-shaped cutouts spread across the centre of the rear panel.

According to the image leaked, the highly anticipated Nokia 9 may sport six cutouts at the back. The three cutouts will be for Zeiss-branded sensors. On the other hand, one is expected for flash while the remaining two other cutouts still remain a mystery. These cutouts are placed at the back in an odd manner. We have never seen such a camera setup before which is making us question its legitimacy. Let’s have a look at the leaked image. 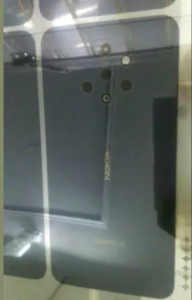 The Nokia 9 camera setup will reportedly pack 41-megapixel, 20-megapixel, and 9.7-megapixel sensors on the back with Carl Zeiss optics in a triple camera setup. It will sport with 4x optical zoom, alongside both Xenon and LED flash modules. We are not sure about these specs because the company has not announced them officially.

It was also reported to launch at IFA 2018 but that didn’t happen. It might be possible that HMD Global had cancelled mid-2018 launch plans of the Nokia 9 because of some major issue regarding the camera setup of the smartphone.

Also Read: Nokia 9 Release Date Is Set To Be August 21