Nokia 9 has started popping up and making headlights via different leaks. The most recent Nokia 9 render gave a look of its back. At the back it shows a penta-lens camera arrangement involving five shooters.

According to the leaks, the camera would revolve around the lenses depending on the shooting modes. The camera arrangement is more of an upside-down dagger, obelisk, or obelus.

Nokia 9 Render Shows the Phone will Come with Five Cameras 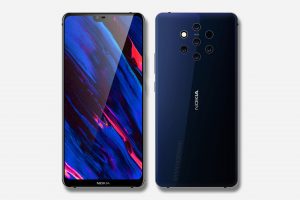 The previous leaked image suggests the highly anticipated Nokia 9 may sport six cutouts at the back. The three cutouts will be for Zeiss-branded sensors. On the other hand, one is expected for flash while the remaining two other cutouts still remain a mystery. These cutouts are placed at the back in an odd manner. We have never seen such a camera setup before which is making us question its legitimacy.

It was also reported to launch at IFA 2018 but that didn’t happen. It might be possible that HMD Global had cancelled mid-2018 launch plans of the Nokia 9 because of some major issue regarding the camera setup of the smartphone.