Nokia new G-series is mid-range smartphone line. As per rumours soon a new model named the Nokia G50 5G will be arrived in the market. Leaked pictures and specs indicate the upcoming smartphone sibling of new Nokia G10.

The European WinFuture.de report disclose  the details of latest smartphone that the Nokia G50 will base on the Qualcomm Snapdragon 480. The smartphone will come cheap 5G chip based on production technology of 8nm. The smartphone will be powered by strong battery of 4,850 mAh. The battery is expected to last up to two days on a single charge, prominent feature for the G-series. But unfortunately, the G50 can’t charge fast while you’re battery running low. 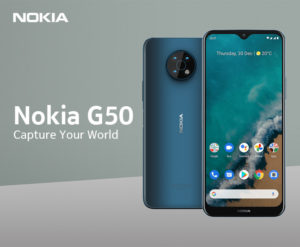 The device will be available im two shades,  sand and blue. Leaked report also displays Nokia G50 5G images. The concept that HMD Global used in the last several generations has once again been repeated. A large circular camera installed on a back shell. It is expected to come with three lenses and an LED flash on the rear.

Device will be equipped with a side-facing thumbprint reader. Turn over the Nokia G50 5G for a small screen. The show is surrounded by a large notch and a heavy chin. 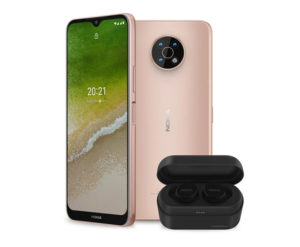 The device features a 6.38″ LCD IPS that provides a standard refresh rate of 60Hz for 720P expectedly. A 48MP large camera and two low-resolution sensors installed on the back camera system. No launch schedule has been announed yet, but the Nokia G50 has already revealed its cost through a leaked retail listing.

The Nokia G50 5G will be Nokia’s cheapest 5G phone. Its expected price will be €230 (approximately Rs. 45,300), also Nokia could offer free TWS earphones with its latest smartphone launch.

You may be also interested: 5 Hidden features iPhone: Tricks you have never used before