The new promotional poster has confirmed the Nokia X6 Design.  As we know that previous rumors suggested the launch date of Nokia X6 on 27 April, but that couldn’t happen because of some reasons. However, HMD Global has finally confirmed that its first notch-equipped smartphone would be launched on 16 May.

A Chinese retailer has revealed a promotional poster just before few days ago for the device, that includes official renders.

This new poster, created by retailer, gives a clear look of upcoming Nokia X6 design. As can be seen in the poster, the Nokia X6 will come with a glass and aluminum build, as we have seen in some other flagship devices. The phone has the front panel.

Nokia X6 design has tall 5.8-inch, 19;9 display that comes with a small notch up top and a slight chin underneath. Moreover, thin bezels on either side has been spotted in poster.

However, this new upcoming smartphone Nokia X6 design looks similar to a number of recent Nokia devices. The phone appeared with the company’s signature tube-like vertical camera setup. It has a circular fingerprint reader. 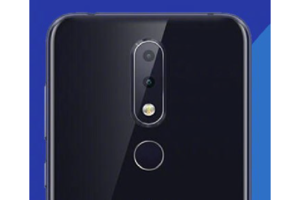 When it comes to the Specifications of Nokia X6, the phone is set to come with Qualcomm’s Snapdragon 636 on the inside of the handset along with a 6GB of RAM. However, it has been leaked that the company is also preparing a 4GB of RAM model with a MediaTek P60 processor.