We all know that Nokia 7 Plus has won the award of “Consumer Smartphone of the Year” at EISA Awards 2018. Now many rumors have been swirling about the upcoming Nokia 7.1 Plus model that will be most probably called Nokia X7. A few days back, Nokia X7 appeared in 360 Degree Rumor-Based Renders which unveiled that the smartphone will come with minimal side bezels and a small notch. Recently, Nokia X7 Live Images showed up revealing some details about its back.

The live images showed up at the Chinese social network Baidu. The first live image of the upcoming smartphone gives us a look at the protruding camera setup. It will have two sensors. Furthermore, there will be a LED flash on the left side. It will sport a circular fingerprint scanner positioned below the camera setup. There will also be the obligatory Nokia logo below the scanner.

The live images revealed two color options for the upcoming phone. Nokia X7 color options include a Copper Gradient as well as a Silver one. Let’s have a look at them. 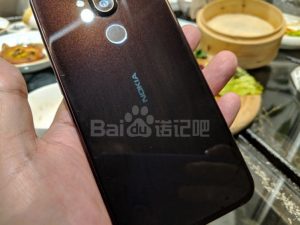 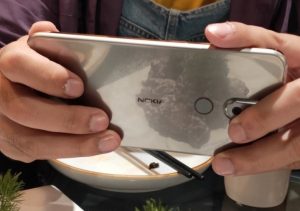 According to the leaked information, the Nokia X7 will be the first device by HMD Global to ship with the Snapdragon 710 on the inside. Moreover, the phone will have a 128GB of internal storage and 6GB of RAM. In addition to that, the phone will come with minimal side bezels and a small notch. The phone will feature a dual camera setup and a rear-mounted fingerprint reader. However, there are still no words about its price yet.

Moreover, the Nokia X7 will be announced at HMD Global’s event that is scheduled for October 4. Presumably, sales will then commence shortly after.