A couple of days, the smartphone company ‘Nothing’ founded by Carl Pei launched its first-ever smartphone, the Nothing Phone 1. For past months, the phone gained a lot of traction, and hype was surrounding its launch. However, the phone will have to overcome several challenges, as it is being launched in a highly competitive market. As the smartphone is launched in the midrange category, it would have to compete with a number of established brands such as Samsung, Xiaomi, OnePlus, Realme, etc. In this regard, we are going to make a comparison of Nothing Phone 1 vs OnePlus Nord 2T, as both have been launched at almost the same time and also comes in the midrange segment.

Why are we making a comparison of Nothing Phone 1 with the OnePlus Nord 2T?

It is pertinent to mention here that the last OnePlus smartphone launched under Pei’s leadership was the OnePlus Nord and the lineup has grown with the latest one being the Nord 2T. Therefore, we are going to make the first comparison of Nothing Phone 1 with the OnePlus Nord 2T.

So, here is the comparison between the two smartphones on the basis of design, performance, camera, interface, and more.  So let’s start with the design, Nothing Phone 1 stands out from almost all other Android smartphones because of its unique design. The smartphone has a unique design with a transparent rear panel that is covered in LED lights. The “Glyph Interface” is the name given to this design by the manufacturer, and when a call or notification comes in, the LEDs turn on. Apart from this, the smartphone has flat corners that resemble those of iPhones. Furthermore, with a metal frame that is entirely constructed of recyclable aluminum and a transparent back that shows internal parts like the wireless charging coil, Nothing has amplified its transparent design theme.

However, if you are not drawn to this unique design with a bright rear panel, then OnePlus Nord 2T may become your preferred choice. It has a basic design and a conventional appearance, with metal-finished edges.

In terms of display, the two smartphones have close competition. The 6.5-inch FHD+ OLED display on the Nothing Phone (1) is larger than the 6.43-inch FHD+ AMOLED panel on the OnePlus Nord 2T. Given that both smartphones have Corning Gorilla Glass 5 protection and HDR10+ capability, the other display characteristics are pretty similar. The selfie camera sensor is housed in a punch-hole cutout in both smartphones.

However, the main difference between the two displays is the refresh rate. The Nothing Phone 1 reaches up to a comparatively smoother 120Hz while the Nord 2T tops out at a more modest 90Hz. Nothing stands out on paper when comparing specs, but you’d need to compare them side by side to see the difference in practical use. 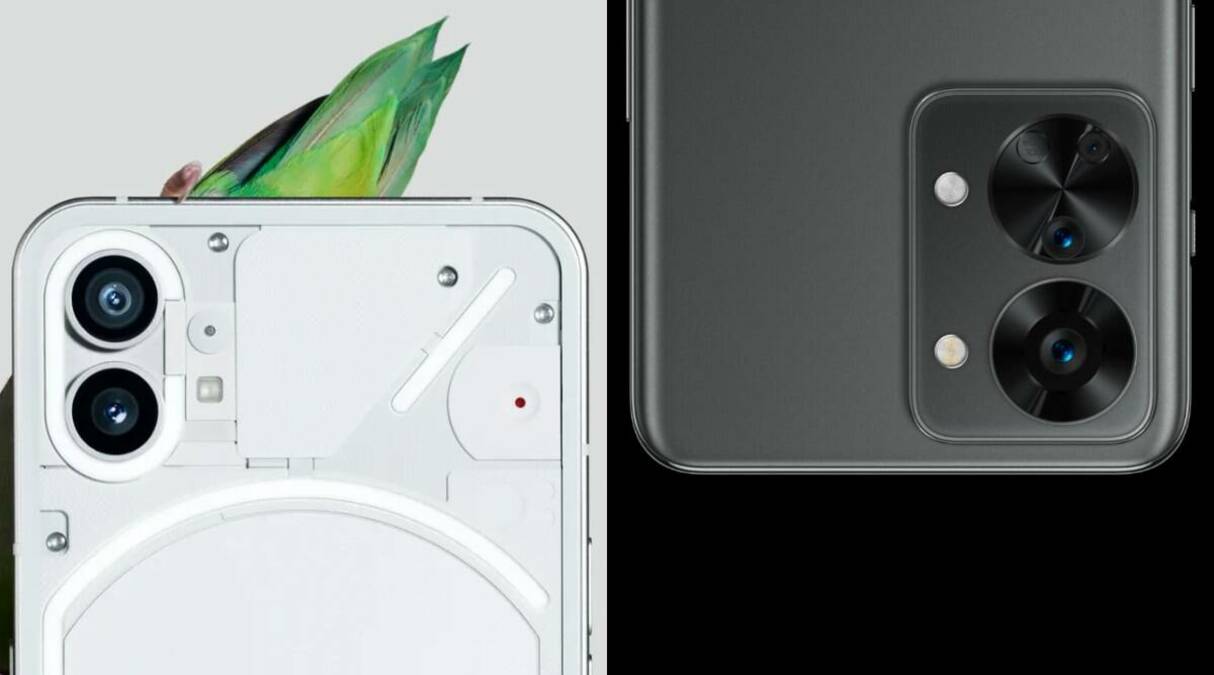 In terms of rear camera, the Nothing Phone 1 features a dual camera setup while the Nord 2T features a triple camera setup. However, the former has better picture quality. The Nord 2T’s main camera produces excellent daytime photos, but OnePlus’ philosophy of “more” rather than “better” puts it at a disadvantage in terms of photography. The maximum resolution of its ultrawide camera is 8MP, while the 2MP macro is hardly worth using. Nothing has instead used two lenses and has opted for large 50MP Samsung sensors for both the main and ultrawide lenses.

On the other hand, both the devices have the advantage of the glyph lighting effects being useable as a fill light for close-up pictures.

In the end, image processing determines whether a smartphone camera is successful or unsuccessful, therefore we must compare both phones head-to-head before deciding which produces the best-looking images. You might prefer the way one phone is handled over the other, but in terms of sheer hardware, we believe Nothing has the advantage.

Both of these smartphones are featuring punch-hole selfie cameras. However, if we see the specifications, the OnePlus Nord 2T takes the lead as it is equipped with a 32 MP camera while phone 1 has a 16 MP selfie camera.

Many people who were interested in buying Nothing Phone 1 was let down by its Snapdragon 778G+ processor, which was not as good as what was expected. On the other hand, the MediaTek Dimensity 1300 SoC powers the OnePlus Nord 2T, which is comparatively better. Both processors come in the midrange category. However, benchmarks suggest that the Dimensity 1300 SoC has a faster clock speed than the Snapdragon 778G+. But we won’t know the differences until we see how they work in real life. When it comes to other things, both phones have a lot of the same connectivity features.

We haven’t tested the Phone 1’s 4500mAh battery yet, but on paper, it should be a little better than the OnePlus Nord 2’s cell, which has the same amount of power. Based on phones we’ve tested in the past with similar hardware, Qualcomm’s CPU uses a little less power than MediaTek’s. Both should work well for a full day, but we think the Nothing Phone should be able to go a little longer before needing to be plugged in.

The Nord 2T can be charged faster because it supports 65W warp charging, while the Nothing Phone 1 only supports 35W fast charging. Still, both should be able to refuel in about an hour. Importantly, the Nord 2T comes with a charger that works well with it. The Nothing phone 1 only comes with a USB-C cable, so you have to bring your own charger.

We have jotted down a comparison table below for further elaboration of the specs of both phones.

Apart from the chipset aspect, the Nothing Phone 1 takes the lead in all other smartphone attributes. So, clearly, in comparison of Nothing Phone 1 vs OnePlus Nord 2T, the former is the winner. However, still, the verdict we made was on the basis of on-paper specs, and we haven’t checked the real-life performance of both phones. Therefore, it can change after an in-depth real-life review of both phones.

If you want to know the tax on Nothing Phone 1, then click on the link below:

How much it would Cost to Import Nothing Phone 1 in Pakistan?