Researchers at the University of South Australia and the University of Stuttgart now use eye movements to predict key traits of your personality. WOW! sounds cool. The researchers discovered that Artificial Intelligence Can Predict Your Personality by tracking and monitoring the eye movements of 42 human participants using a video-based eye-tracker from SensorMotoric Instruments.

They have discovered a connection between people’s personalities and their eye movements.

Artificial Intelligence Can Predict Your Personality by Just Scanning Your Eyes

This new technology can find  four of big five personality traits. The artificial intelligence is able to reliably identify neuroticism, extraversion, agreeableness and conscientiousness but could not detect openness to experience. 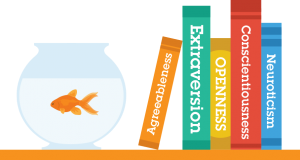 The study says that this is the first time that eye movements have been used to identify personality traits, which is no doubt very interesting but Tobias Loetscher from the University of South Australia thinks that the end goal is to improve human-machine interactions at some point in the future.

The researchers wrote in the study that:

The research highlights the close link between eyes and personality. This artificial intelligence also provides opportunities to develop robots and computers so that they can become more natural, and interact better with humans in order to interpret human social signals.