From the last few weeks, Facebook is on fire due to its blunders and data scandal. The list of scandals is very long, but to cut it short, it all started with Cambridge Analytica Scandal, and recently we heard that Facebook made deals with Apple, Samsung & other Tech giants to get access of Personal Data. It was also attacked by a bug that Made Private Posts of 14 MN Users Public. Another Facebook bug unblocked users from the blocked list. It seems that after plenty of scandals which shocked users, Facebook wants to make its users happy with new Facebook Mute Button.

Facebook is testing a new feature that will allow people to temporarily mute all mobile notifications. This news was revealed in a screenshot taken in beta app.

This new feature is spotted by Digital media consultant Matt Navarra, who also told about “do not disturb” button which acts as an on/off switch for notifications in Facebook app.

Facebook is testing a mute button for ALL its annoying notifications https://t.co/HYITaoqhOs pic.twitter.com/G8flExOqNi

Matt also reported that the social network is testing time limits for do not disturb, so that one can mute notifications for some time with Facebook Mute Button. 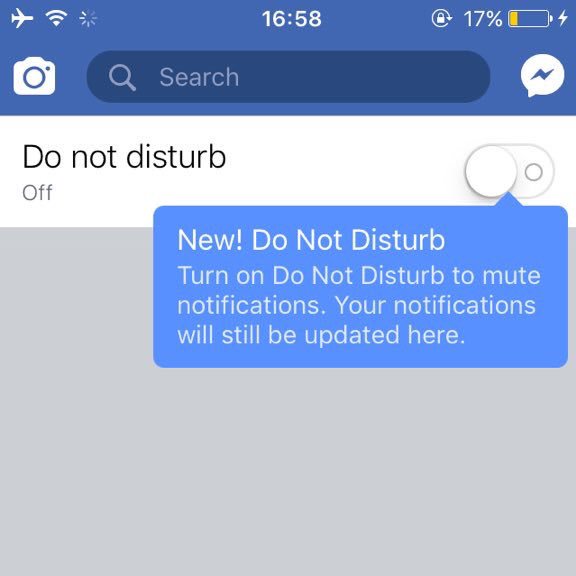 Spotted by @MattNavarra and @WABetaInfo pic.twitter.com/ibZgr0FnoE

Right now its not clear when Facebook will launch this feature after passing it through the testing phase. However, Facebook tests new features with small group of users and doesn’t always make them available to everyone.

Tihs feature is some what connected to the the Facebook’s initiative to empower “time well spent”. No doubt, the aggressive notification received on Facebook were always annoying and were designed to bring people on app to spend more time on the app. Finally last month, Facebook changes it’s strategy and announced that it want people to spend quality time on it’s app.

Facebook is also testing a feature that will alert users that how much time they are spending on the App along with reminders that you have reached a pre-set time limit.

Let’s see when we will finally get rid of annoying notifications.