WhatsApp has made our lives easier by making communications smooth. Every passing day, we are getting more and more features, giving us reasons to stay on this app. When it comes to groups, WhatsApp is not the pioneer but it has made this platform so immersive that it is now a vital part of lives. WhatsApp launched group chats in 2011 and since then it is bringing multiple features associated with it. While every thing goes safe and sound in groups, but the admins do not have much control. Keeping in view need of deleting someone messages for good, WhatsApp is testing beta with powerful feature that will give WhatsApp group admins the freedom of deleting messages sent by members.

Presently, WhatsApp admins can only decide who can join groups, send messages, and configure disappearing messages. Other than this, other tools for moderating groups are quite limited and deleting anyone’s message is not allowed. Finally, the company is bringing this capability.

It means group admins will be able to delete messages sent by anyone by long tapping on a particular message and selecting  ‘delete for everyone’ option. The chat will leave a space under the name of administrator who deleted it. It will show that this action is taken by a particular administrator and not the sender. 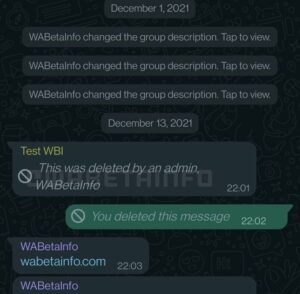 I wont say that WhatsApp is pioneer when it comes to launching this new feature since Telegram and Discord have already launched this feature. However, it seems this feature is launched as an effort to halt hate speech in groups and force participants to follow the rules and regulations of the groups. As a part of internal testing we initially saw this feature back in May but now it is made an integral part of public beta channel.

The beta rollout of this feature is quite slow so if you have singed up for WhatsApp beta, you will have to wait for some weeks to get you hands on this feature. Till then, wait and watch for the other upcoming features on WhatsApp making our lives easier and more interactive.

Also Read: What is GB WhatsApp? Is it safe to use it? and How To Send Photo as a WhatsApp Document