Facebook-owned company WhatsApp was accused of spreading fake news and misconception among people. After various Facebook scandals, the company has become more careful and introduced various features to curb fake news. Just a few days back, WhatsApp announced a new feature named, Suspicious Link Detection. WhatsApp fake News tool will help users to identify suspicious links shared within the platform. The messaging app will automatically detect whether the link that a user receives is fake or spam. Now you will be able to Label Forwarded Messages in WhatsApp to curb fake news.

According to WhatsApp, this new labelling to its forwarded message will solve the misconception problems. The new label will indicate when a message has been forwarded to someone from another user. This label will apply to text, images and audio messages.

WhatsApp announced this new label feature in a blog post:

“Starting today, WhatsApp will indicate which messages you receive have been forwarded to you. This extra context will help make one-on-one and group chats easier to follow. It also helps you determine if your friend or relative wrote the message they sent or if it originally came from someone else. To see this new label, you need to have the latest supported version of WhatsApp on your phone”

‘Label Forwarded Messages in WhatsApp‘ will help users identify whether the message sent to them has been written by the sender or originated via a third party. However, this new feature can be bypassed by anyone quite easily. One can simply copy-paste the required message to another chat, instead of selecting it and pressing the actual forward icon. 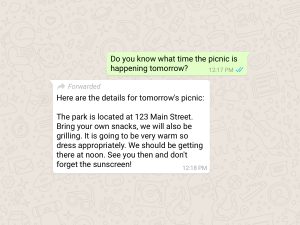 Before launching this feature worldwide, WhatsApp had beta tested these forwarded labels in India. The success of this new feature depends upon which of the two methods users generally tend to employ when passing on messages received from someone else. If people just forward message instead of copy-pasting them, then the addition of a label will for sure lead to the easier identification of forwarded messages, which will, in turn, reduce fake news issue.