The telecom sector is one of the fastest growing segments of Pakistan’s economy. No Doubt, the telecom sector of Pakistan has undergone through huge transformations after the arrival of 3G and 4G services in the country. From the increase in mobile phone penetration to the launch of various m-Services; Pakistan’s telecom sector has become a success story for some regional countries who are left behind in the technological race. This is also evident from the recent stats announced by the PTA. The number of Mobile Subscribers in Pakistan reaches 151 Million. Meanwhile, the number of 3G/4G subscribers in the country has crossed 57 million.

These stats show a reasonable growth with each passing months.  In July, the numbers of Mobile Subscribers in Pakistan were 150.3 Million. 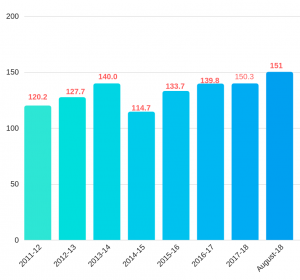 While talking about this achievement, an official from Ministry said, 4G network rollouts continue across the country, By 2017 over 30 percent of Pakistan population was covered by a 4G network. Pakistan has seen a dramatic increase in mobile broadband penetration over the past five years with market penetration increasing from below one percent in 2012 to 24 percent in 2017, he added.