Leaker Ice Universe had shared a picture for the upcoming Galaxy Note 9 last week or we can say it was a promotional material. It was the first image that surfaced online with blue and yellow colorway. However, now the Official Press Render of Samsung Note 9 has Leaked.

Evan Blass has shared an official press render of the navy blue Galaxy Note 9 with a yellow S Pen. 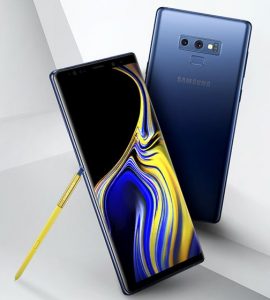 From the photo we can see clearly the front and back sides of Samsung’s upcoming flagship along with the entire length of the S Pen.

The leaked image by Blass has now confirmed that Samsung is moving the fingerprint sensor of below the dual-camera array. It also seems that the bottom bezel has been reduced slightly. Moreover the power, volume, and Bixby buttons are raised if we compare them with the Galaxy Note 8.

Official Press Render of Samsung Note 9 also clearly shows that yellow S Pen has a dual-tone yellow color for the body of the stylus. The portion of the S Pen which will be hold by users appears to have a matte finish and the top third seems to be shiny. The back end of the stylus is sporting the same navy blue color to match the handset but it is not clear that how the S Pen will charge inside of the handset.