PML-N, which governed the province for the last 10 years, created the Twitter handle in 2013. After the elections, it was the duty of the PML-N administration to hand over the account to the new government. Instead of doing so, PML-N refused to transfer the account to the new government. The official Twitter account of Punjab Government, recently archived by the PML-N as ‘Punjab Government (2013-2018)’, got deleted.

The current government has now set up a new profile which is linked to the official website. The sad part is that the previous account verified by Twitter which got deleted had a massive following of 226,000 followers. On the contrary, the new handle hardly has 386 followers at the time of writing. 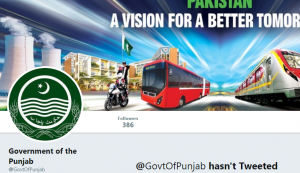 In response to this, PTI Senator Faisal Javed stated that:

“This is the property of the government, and PMLN has no right to hijack these digital assets, this should be investigated and those responsible should be held accountable”

We all know that PTI-government has successfully set up its government after their great victory in the recently concluded elections. This was an act of great disappointment but PTI members remain reserved towards the behavior of PML-N. However, they are expected to raise the issue in the coming days.

A senior member from the social media team of PTI, Imran Ghazali said that: