There are LCD displays on some phones and TVs, OLEDs on others. We describe the differences between LCD models and OLED flagship models and why you prefer to buy one type over another. The two-screen styles are used for all mobile phones: LCD or OLED. Just how distinctly are they and how better is one than the other?

The consumer technology industry is now dominated by these two display technologies. These are organic light-emitting diode or OLED displays and in-plane switching liquid crystal display or IPS LCD. An OLED uses organic compounds, which emit light through an electric current as a backgrounder. On the other hand, an IPS is a particular LCD type. Because of its greater size and improved color reproduction, both an OLED display and IPS LCD dominated the industry.

You want to choose an LCD or OLED? But confusing to decide which is stronger of these two? What are of each one benefits and discomforts? So, if you know their advantages and disadvantages here see the detail.

A Comparison of OLED and IPS LCD

What is an IPS LCD?

IPS LCD is synonymous with Super LCD, which stands for in-plane switching liquid crystal display. It’s a label given to an LCD display that uses panels for an in-plane switching (IPS). LCD devices provide a backlight on all pixels, and any display shutter can be disabled to adjust the brightness.

IPS LCD was designed to resolve issues with TFT LCD screens to support a broader vision and much better color and contrast. The LCD uses a polarised light that passes through a color filter afterward. In each side of the liquid crystals, horizontal and vertical filtres control the brightness, and whether each pixel is on or off

What is an OLED?

The Organic light-emitting Diode (OLED) is a light-emitting diode (LED) in which the emissive electroluminescent layer is a film of an organic compound which emits light as a response to an electrical charge.

This organic layer is placed between two electrodes, usually one of which is translucent. In equipment such as television screens, computer monitors, mobile devices such as tablets, portable game consoles, and PDAs, OLEDs are used to build multimedia displays. The development of white OLEDs for use in lighting applications of solid-state is a major field of study.

Both OLED and IPS LCD have a higher contrast range and are therefore more accurate images or videos for both the reproduction of colors. However, every display technology has its own unique features that enhance one than another.

OLED creates darker blacks than IPS LCD and has a better angle of vision. Also, OLED has a better contrast ratio. IPS LCDs display greyish pictures or videos of black or black colors. Pictures or videos look less vivid when viewed from a different angle In LCD. Oled vs IPS LCD is better in display quality.

The contrast ratio of the OLED is higher because the blacks emerge in the absence of light, whereas the blacks are typically based on light blockage in an IPS LCD. OLED vs LCD display is comparatively low in display quality.

The wide viewing angle of an OLED comes from the fact that its individual organic pixel produces both light and color. Light comes from backlighting in an LCD technology, but the colors are produced by individual pixels.

Another important point of comparison is OLED vs LCD power consumption. OLED has the advantage between the two. Each diode generates its own light and color inside the OLED panel. To make the colors clear, the entire panel needs no backlights. Besides that, IPS LCD requires backlighting, which in turn results in higher LCD power consumption. LCD vs OLED consumes more power.

Light also comes from an OLED panel without generating too much heat. Energy consumption on the panel is relatively unequal since only visible colors in active diodes extract power from the source. images with dark colors are also less power-consuming but blacks don’t use any power.

For an IPS LCD, also during its operation, energy consumption is generally performed. Actually remember that the backlight has to draw power continually from an energy source.

OLED screens are even thinner as compare to IPS LCDs. Later in an OLED panel, the organic plastic is 100 to 500 nanometers thin. Some layers are 200 times thinner than the single strand of human hair.

Overall, it’s not only a thin but also an entire OLED panel is flexible. With this physical property, devices can be made thinner using OLED than using IPS LCD.

New form factors have since been developed and introduced devices with foldable and flexible display panels. The LCD panel, since it has more complex layers, is generally thicker than OLED. Moreover, its rigid crystalline structure does not make it flexible.

Two disadvantages of OLED displays are their lifetime and their sensitivity to damage. The benefits of IPS LCD over OLEDs, on the other hand, are longer lifetime and durability. Any organic diode in an OLED panel is vulnerable to immersion water damage and humidity exposure. A water-exposed diode will not be repaired.

OLEDs are also known as burn-ins, probably poor color reproduction and dead pixels. This is because blue diodes decay more rapidly than red and green ones. with the time, a person who uses OLED display will find on their OLED display panels permanent imprints of overused static images.

Both wearing and tearing are vulnerable with flexible OLED panels. A plastic substrate can be folded and unfolded only a limited number of times. The material under physical stress is folded and formed as well as the bending and unbending subject.

Other things need to be focused into consideration when comparing the display quality of OLED displays and IPS LCDs.Be mindful that for these two IPS LCDs are more apparent when using in the light or use outdoor because of its feature to use of own backlighting.

In addition, an OLED display is difficult to see under light or even if used outside in daylight. The light that the organic diodes collectively produce would not work against stronger artificial light like sunlight.

IPS LCD is slower than OLED when it comes to the refresher rate. It is important to keep in mind that a low refresh rate is a major limitation in the IPS LCD. These facts impact the viewing of high-frame videos or when play fast computer-paced games. Importantly,  It varies on the recovery rate though. LCD with a higher refresher rate is also good but still, OLED is strong over to LCD.

You shouldn’t consider an LCD panel if you’re not a hardcore player, because it’s not as strong as an OLED display which has wide (saturated) colors and deep Black color that adds another benefit of low energy demand.

The refresh rate is also necessary to minimize motion bursts or to blur everything that moves on the screen (including the whole image while you are holding up the camera). Unfortunately, the new OLED variant is motion bubbles/blur, same as LCD. display.

Pros and Cons of LDC & OLED 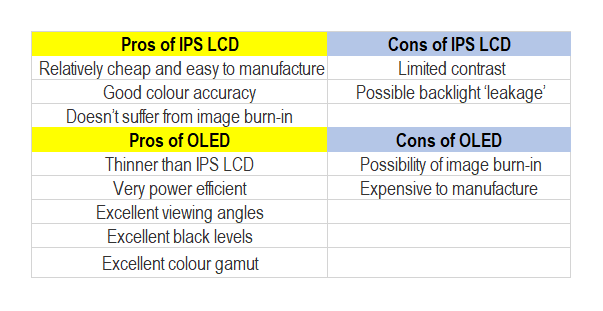 It is hard to judge the diode is stronger for organic light-emitting or OLED displays, or an in-plane switching or IPS LCD. OLEDs have more benefits than IPS LCDs, based on the above-listed information.

Furthermore, over OLED displays, IPS LCD has advantages. The longer life and reliability of the devices equipped with that particular kind of LCD technology are major advantages because they translate into stability and stronger usability.

I hope this guide helps you, even if you are comparing OLED vs LCD on iPhone 11 Series, it’ll will help you as well. Let us know about your thoughts in the comment box below.

You may be interested in AMOLED vs LCD: What is the difference?