We all know that OnePlus is all set to launch their upcoming smartphone, OnePlus 6T by the end of this month. According to the previous reports, OnePlus 6T Launch Date was set to be October 30th. While the company was planning the launch event, Apple also announced its event on the exact same day and city. So, OnePlus rescheduled the launch event a day early. OnePlus 6T Launch Event will now take place on October 29 instead of Oct 30th. 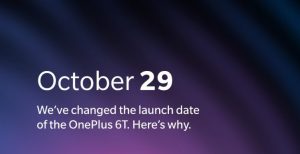 Pete Lau, the company’s CEO, has clearly described that they didn’t want Apple to steal their thunder. He stated that:

“In any pursuit, you can only play the cards you are dealt. We were dealt a pretty bad hand. Our challenge was to find a way to make the most of a bad situation. For months on end, hundreds of people have poured their hearts and souls into creating our best product to date. Our goal is to make sure it gets the time and attention it deserves”

Furthermore, he has also promised to refund tickets for the people who won’t be able to attend the event on the new date. The company claims to remain in touch with all ticket owners individually to sort all the problems that have been caused due to change in the launch date.

According to the previous reports, OnePlus 6T will be identical to OnePlus 6 in terms of memory. It will be available in three configurations – 6GB RAM + 64GB storage, 8GB RAM + 128GB storage, and 8GB RAM + 256GB storage. Moreover, it will feature a 25MP front-facing snapper for selfies and an in-display optical fingerprint reader.  A massive 3700mAh battery will keep the lights on. Moreover, the renders of OnePlus 6T revealed that it will feature a 6.4-inch Full HD+ resolution AMOLED display with water drop notch. The handset will see the light in Newyork on October 29.