We all know that OnePlus is all set to launch their upcoming smartphone, OnePlus 6T by the end of this week. According to the previous reports, OnePlus 6T Launch Date was set to be October 30th. While the company was planning the launch event, Apple also announced its event on the exact same day and city. So, OnePlus rescheduled the launch event a day early on October 29 instead of Oct 30th. Recently, OnePlus 6T specs sheet got leaked that revealed all the features of the upcoming phone.

A leakster with the Twitter handle IshanAgarwal24 unveiled the full specs of the upcoming handset by posting its leaked specs sheet and a few marketing images. Let’s have a look at that: 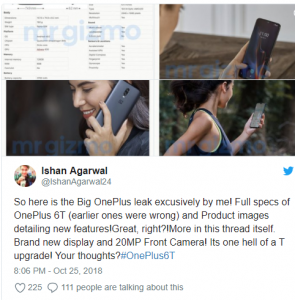 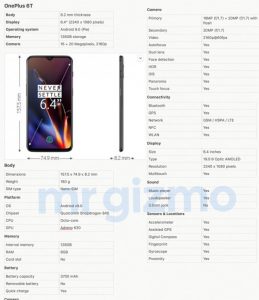 OnePlus 6T will be slightly taller than its predecessor. It will be narrower and slightly thicker than OnePlus. However, it will come with a larger battery size. A massive 3700mAh battery will keep the lights on. The phone will be powered by the Snapdragon 845 paired with Adreno 630. It will come with Android 9 Pie straight out of the box.
Moreover, it will feature a 20MP front-facing snapper for selfies and an in-display optical fingerprint reader. On the other hand, the rear camera setup will include 16MP+20MP Cameras. The selfie camera will get a bump due to its wider aperture and higher resolution than its predecessor.
Moreover, the specs sheet also confirmed that OnePlus6T will feature a 6.4-inch Full HD+ resolution AMOLED display with water drop notch. It will be available in three configurations – 6GB RAM + 64GB storage, 8GB RAM + 128GB storage, and 8GB RAM + 256GB storage.The handset will see the light in Newyork on October 29. However, the phone is no more a secret for us now because almost every spec of the upcoming handset has been unveiled.