The first transatlantic “scent messages” were exchanged on Tuesday between New York City and Paris, and they smelled like champagne and macaroons.

At the American Museum of Natural History here in Manhattan, co-inventors David Edwards and Rachel Field showcased their novel scent-messaging platform, which involves tagging photographs with scents selected from a palette of aromas, and sending them via email or social networks. The messages are then played back on a device called an oPhone.

From Paris, collaborators Christophe Laudamiel and Blake Armstrong joined the New York audience via Skype, and emailed a scent-tagged photograph of French delicacies and champagne they had just poured to celebrate the launch of the oPhone. When the oPhone on the New York side picked up the message, the device exuded a subtle aroma that matched the picture.

The scent messages, called oNotes, are composed in an iPhone app called oSnap, which launched on Tuesday. Using oSnap, users can mix and match from 32 primitive aromas to produce more than 300,000 unique scents.

The 32 aromas are placed inside oPhone’s eight “oChips,” which can be thought of as a printer’s ink cartridges. When the device receives an oNote, it releases the corresponding aroma based on the aromatic tags assigned to the image. 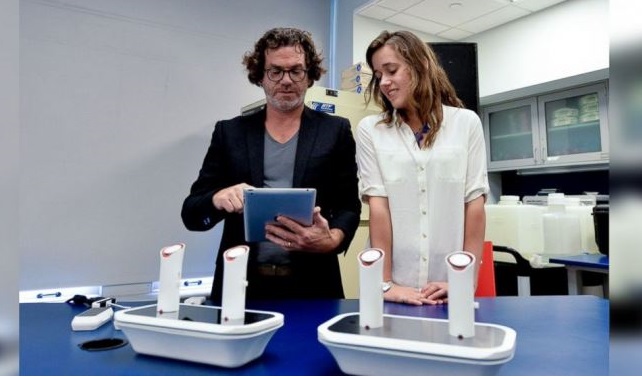 Each scent is designed to last roughly 10 seconds. If the photo is tagged with more than one scent, the smells will play one after the other.

ONotes are transmitted via email or social media, and can be picked up at hotspots where there are oPhones to receive them. The oPhones are available to preorder for $149 as part of the company’s Indiegogo campaign. The American Museum of Natural History will host the first U.S. hotspot during three weekends in July. Cafes in Paris also will be displaying oPhones.

Vapor Communications – The company behind the scent-messaging platform.