OPPO A5 was launched back in July 2018. Now, the company is all set to launch a refreshed version dubbed as OPPO A5s. Recently, the OPPO A5s key specs got leaked.

Here Are The Leaked Specs Of OPPO A5s

According to the latest leak, the handset will have a 6.2” LCD with HD+ resolution. In addition to that, the upcoming handset will sport a waterdrop notch. The smartphone will be powered by the Helio P35 chipset. This chipset has the same CPU configuration as the Heli P30, but comes with PowerVR GE8320 GPU. In addition to that, it has plenty of AI camera features. The Helio P35 is built on the TSMC 12 nm process. 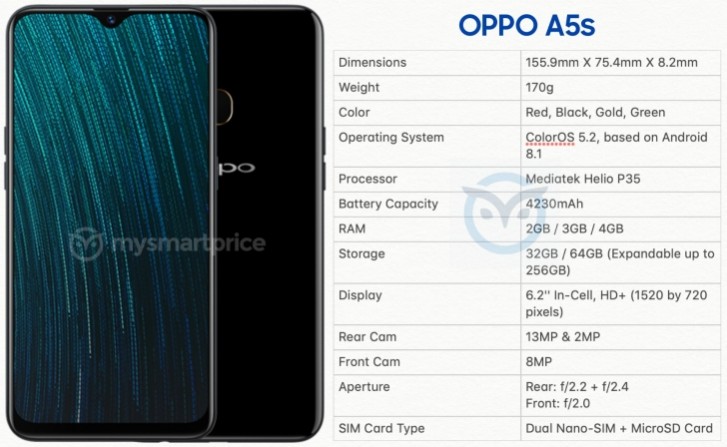 The upcoming handset resembles the Oppo A7 a lot. Many of its specs are the same as that of A7. The previously launched OPPO A7 was introduced in Gold and Green. According to the reports, both of these colors will be seen in the Oppo A5s as well. However, this time Black and Red colors will also give them company. The handset will be powered by the 4,230 mAh battery cell to keep the lights on. There had been no words about the launch and specs of the handset by the company yet. Let’s see when will it make its way to the market.