As we already know that OPPO is working on a new smartphone that is actually a re-packaged of realme 2. Many rumors have already been circulated revealing some specs of the phone. Now the new OPPO A7 Renders Reveal Teardrop Notch Design.

OPPO A7 renders reveal that the pretty distinct geometrical pattern design, available in Diamond Black, Diamond Red, Diamond Blue colors. Moreover, the phone will come with another color option, Graze Blue, as well as a name for the gold version – Glaring Gold. 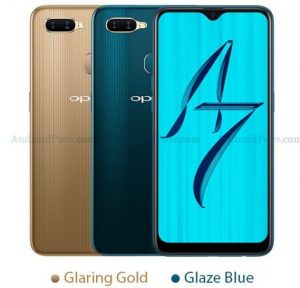 According to the previous leaks, the OPPO A7 will come with a 16MP f/2.0 front-facing selfie snapper. Moreover, it will feature a dual rear camera setup comprising of 13MP f/2.2 primary and 2MP f/2.4 secondary sensors.

OPPO A7 renders reveal that it will come with a massive 4100mAh battery.  It will come in two different RAM Variants that are 4GB & 3GB. However, the storage on both the variants will remain the same at 32GB. It will have microSD card support for up to 256GB. Moreover, the smartphone will come with 4G VoLTE support. According to the leaks, OPPO A7 Price will be under the 1,999 Yuan mark. It is expected to go live later this month in China. However, there are still no words by the company about OPPO A7 Launch Date.