The launch date of Oppo F9 Pro is getting closer, the device will show its first appearance on August 21. Recently, the key features of this upcoming handset has revealed through a leaked sales pitch.

Two sheets of paper has been leaked with the main specs. The leak sheets listed the reasons to buy the F9 Pro. The phone has the new Gradient Color Body, which changes its color with the lighting. You will enjoy the 6.3-inch FHD+ screen with the water drop notch for the 25MP selfie camera in this upcoming device. 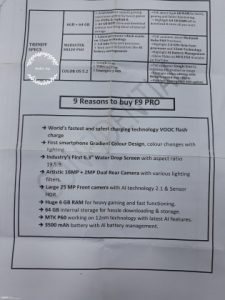 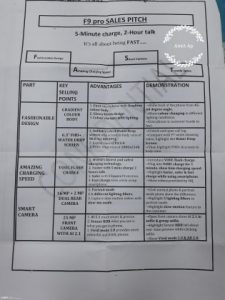 The most inspiring feature of Oppo F9 Pro is it’s VOOC Flash Charge and it is also a major selling point of the F9 Pro. It offers 2 hours of talk time with 5 minutes on the charger. A 5 layer cable easily takes the increased amperage.