Soon, the OPPO Reno5 4G will land in Pakistan. The company has confirmed it officially on social media. You can also visit the Oppo Pakistan’s website to see the official product page. Oppo has already launched the device globally.

The phone features a 6.43” full HD OLED screen, which now peaks at 750 nits of brightness instead of 430 nits. The refresh rate is 90Hz to give you smoother visual experience. A fingerprint scanner is present under the OLED panel. The phone has a reliable 3.5mm headphone jack but there is no support for stereo. 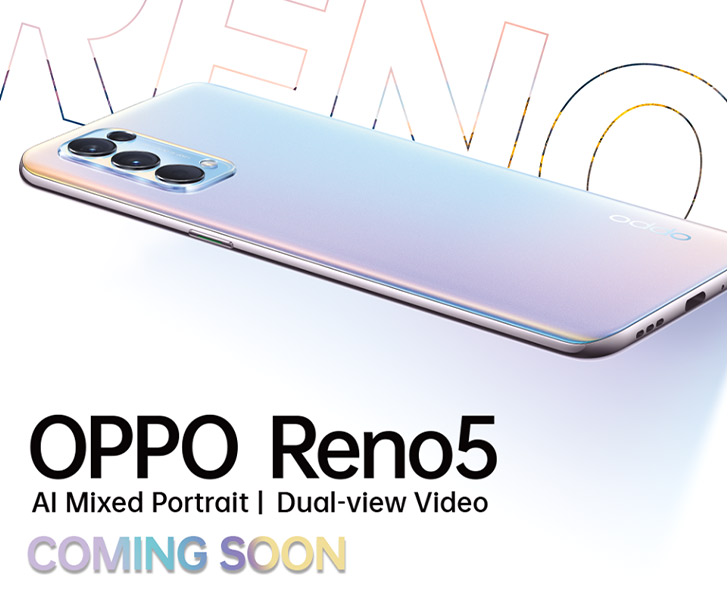 For smoother performance, the phone is powered by Qualcomm’s Snapdragon 720G chipset. The powerhouse is fueled by 4310 mAh battery that charges over 50W instead of 30W. It also promises to give you up to three hours of video playback. The hardware of the phone is running on the latest ColorOS 11.1, based on Android11 out of the box.

The camera section is consist of a 64MP main sensor behind a bright f/1.7 aperture. The three remaining modules are – an 8MP ultra-wide-angle camera (119°) and two 2MP modules. For selfies, there is a 44 MP sensor at the front of the phone.

In Pakistan, the phone will be available in Starry Black and Fantasy White color options. The storage/memory configuration is only 8GB+128GB. At this moment, we can’t say anything about the price of the phone as the company hasn’t share anything officially yet.