The leading global phone brand OPPO known for its iconic design and innovative technology proves to be an expert in marketing as well as in product development. Now, recently OPPO partners Fast & Furious 7 in Pakistan as well.

OPPO has commenced a series of brand events in partnership of the Hollywood blockbuster Fast & Furious 7 in nearly ten countries and regions including Pakistan, Malaysia, Indonesia, Thailand, Vietnam, Philippines and Egypt. This is the second time that OPPO joins hands with Hollywood production following its partnership with “Transformers-4: Age of Extinction”.

As a representative of top-notch Hollywood action productions, Fast & Furious 7 is one of the most anticipated blockbusters in 2015 for fans around the world. The film’s trailer, full of adrenaline-pumping and hormone-stirring speeding scenes, anticipates a watching experience very much like that provided by OPPO VOOC Flash Charge.

First introduced with OPPO Find 7 in the first half of 2014, OPPO’s VOOC Flash Charge is undoubtedly the industry’s fastest charging technology, which puts out a massive current of 5 amp and charges an OPPO phone’s battery to 75% in only 30 minutes, easily solving the battery power problem faced by smartphone users. Besides a more satisfying rapid charging experience, the latest VOOC Flash Charge features five layers of protection in hardware structure and is recognized in several countries as “the safest mobile charging technology in the world”.

The brand events under this collaboration with Fast & Furious 7 will include online and offline activities such as fan interactions and promotions at cinemas. An exclusive premiere for this movie will be held at Cinepax Ocean Mall Karachi. OPPO has developed a special online interactive game for OPPO VOOC Flash Charge and Fast & Furious 7. Lucky fans will receive hundreds of free movie tickets and surprise gifts from OPPO by playing this game and sharing with friends. You can join these activities by following its Facebook and Twitter profiles. 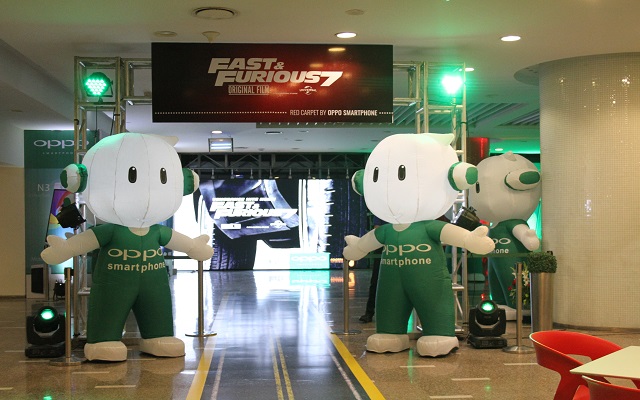